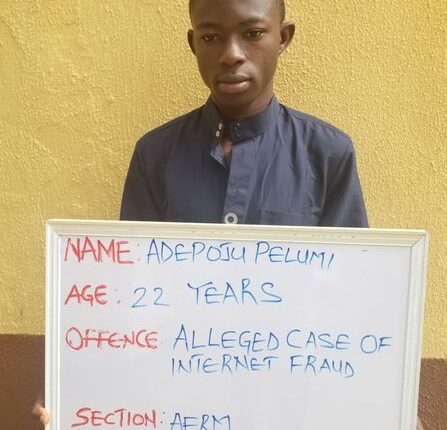 The Federal High Court sitting in Ilorin has sentenced  a student of University of Ilorin, Fuad Olowo  and  Adepoju Emmanuel to one year imprisonment for offences bordering on impersonation and identity theft.

The Convicts: Olowo,  from Abayawo, Ilorin West Local Government Area of Kwara State and Emmanuel, from Ado-Ekiti, Ekiti State who were prosecuted on separate charges contrary to and punishable under Section 22 (2) (b) (i) of the Cybercrime (Prohibition, Prevention, etc) Act, 2015 before Justice Mohammed Sani.

While delivering judgement, the judge sentenced Fuad to six months imprisonment on each count, to run concurrently with an option of fine of N200,000 on each of the two counts. 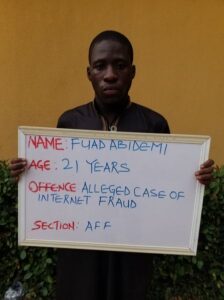 In the same vein, Justice Sani was said to have sentenced Adepoju to one year imprisonment with N300,000 option of fine.

The judge further ordered that the convict would forfeit the HP Laptop, iPhone XR and Tecno Spark 4 phone that were used to perpetrate the crime to the Federal Government.

As gathered, Economic and Financial Crimes Commission, EFCC, on Tuesday, were said to have arraigned the convicts before the court.

The anti-graft agency had arrested Fuad, who was one of the 30 suspected internet fraudsters arrested on May 4, 2021 at the Unigate Hostel, Tanke Area, Ilorin during a sting operation by operatives of the Ilorin Zonal Command of the EFCC.

Investigations by the agency was said to have revealed that the 400Level Plant Biology student of University of Ilorin presented himself as an American Musician, Rick Ross, to deceive unsuspecting victims.

On the other hand, Adepoju, was accused of using the identity of one Kelvin Montalvo, while presenting himself as a military and gym instructor living in California, United States to deceive his victims.

Upon arraignment, Fuad and Adepoju pleaded guilty after the charges was read to them in the language that they could understand.

Following the plea of guilty entered by the defendants, the prosecuting counsel, Andrew Akoja, was said to have urged the Court to consider the extra-judicial statements of the defendants, the guilty plea and exhibits tendered through the investigating officer as well as the provisions of the law to convict the defendants.

After evaluating the facts and the evidence placed before the court, Justice Sani, was said to have pronounced the convicts guilty as charged.