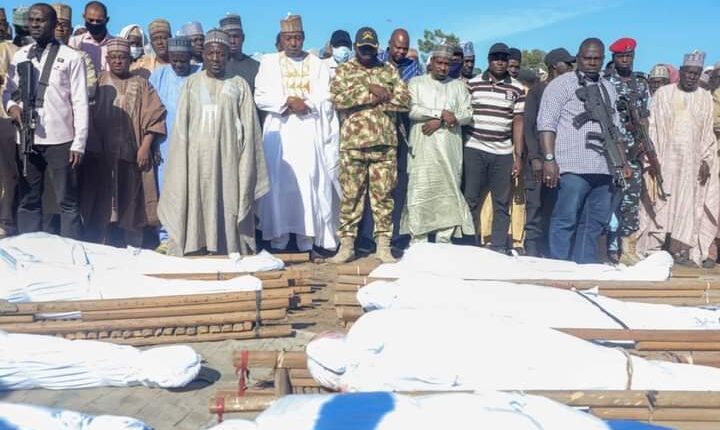 The United Nations has claimed that no fewer than 110 rice farmers from Zabarmari community in Jere local government, Borno State were slain by Boko Haram insurgents as against the 43 ealier announced by the state government.

It claimed that contrary to earlier report,the farmers killed during the carnage were 110 and that women were also kidnapped during the attack.

The UN’s Humanitarian Coordinator in Nigeria,Edward Kallon, described the Saturday afternoon killing as gruesome massacre that would dampened the developmental efforts of the Governor Babagana Zulum-led administration.

Through a statement released to newsmen on Sunday, Kallon said that the attack which claimed atlest 110 lives and left several persons injured was the most violent on innocent civilians in 2020 in Nigeria.

“Armed men on motorcycles led a brutal attack on civilian men and women who were harvesting their fields. At least 110 civilians were ruthlessly killed and many others were wounded in this attack.

“The incident is the most violent direct attack against innocent civilians this year. I call for the perpetrators of this heinous and senseless act to be brought to justice,” the statement said.

The Guild had ealier reported that 43 rice farmers from Zabarmari community in Jere local government area of the state that were slain by Boko Haram insurgents were laid to rest after a mass burial ceremony that have the governor in attendance.

Meanwhile, residents had earlier claimed that more corpse could still be discovered after the completion of an ongoing search and rescue initiated to ascertain number of casualties affected during the attack at Koshebe village, a community in Mafa Local Government.

At the burial rites conducted barely 24 hours after the attack in accordance with Islamic rites, Zulum led kinsmen and other residents, still in shock, to perform funeral on the 43 farmers slaughtered by insurgents.

Zulum, after the funeral, commiserated with the bereaved community and appealed that the Federal Government recruits more youths from Civilian Joint Task Force (CJTF) and hunters into the military and Nigeria Security and Civil Defence Corps (NSCDC).