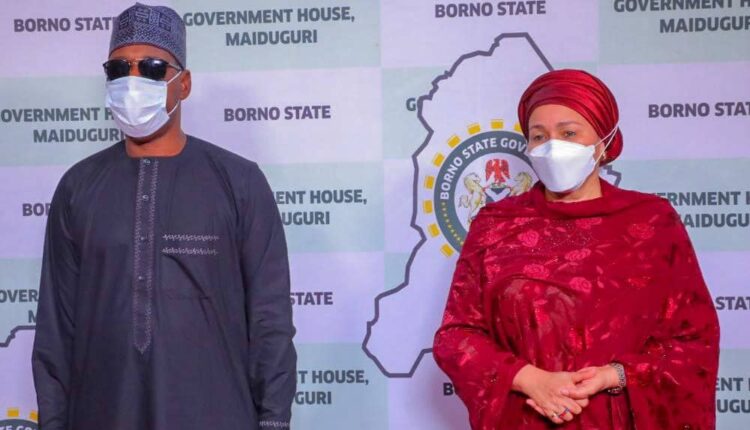 Share
Despite years of devastating Boko Haram’s activities which has left thousands of citizens killed, millions displaced, private and public property destroyed in Borno State, the United Nations has expressed optimism that the state could recover from the challenges and achieve vibrant economy and genuine development.
The  intergovernmental organization maintained that though there were still existing challenges and inconsistent attacks from Boko Haram and other terrorist groups across the state, such development could be halted with commitment and support from relevant stakeholders which would reserve the trend and aid return of normalcy.
UN Deputy Secretary General, Amina Mohammed, said that in achieving economic recovery and restoring normalcy across the state, there was need for stakeholders to amplify priorities and efforts that are need to turn things around and put years of violence and destructing behind in the state.
Speaking yesterday in Maiduguri when she led the UN delegation to the state for an interface with internally displaced persons taking refuge in different camps, Mohammed said that the state remains investment destination and that all avenues must be explored to ensure the state’s development.
According to her, our visit here, one to countries that we are making in solidarity with government and UN staff that are working on ground, and also to hear in terms of responses of the crisis that has befallen the world through COVID-19 pandemic and how we can be of help.
“This morning coming to Borno was specifically for people to understand that in contex of Nigeria there is still an ongoing challenge with some areas of Borno state. Of course conflicts in many areas still under the security threat of Boko Haram insurgents.”
“Borno state in itself is a destination for investment, it is very timely that we visit not just on the humanitarian side but also on the development side. If we are to come out of the crisis one must come to situation where you find prosperity and sustainable livelihood. We look forward to continued collaboration with you, one that can be build with peace and prosperity,’’ she said.
While commending plans by the Governor Babagana Zulum-led administration’s effort to bring places that were hitherto occupied by the insurgents and has affected by the insecurity back to life, she expressed optimism that there are lot of opportunities to bounce back.