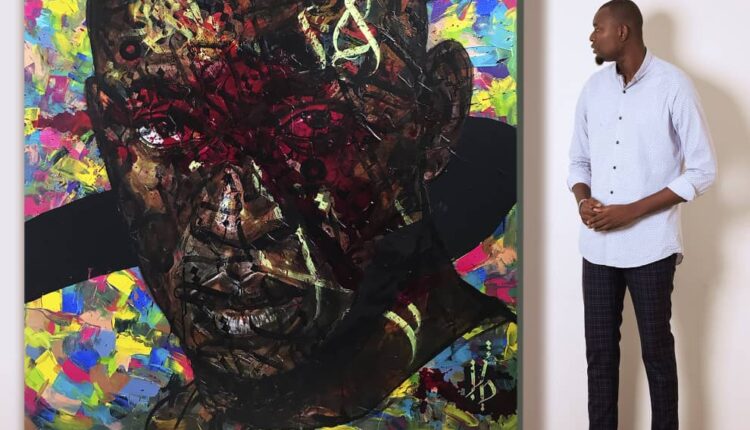 After a thorough assessment of the African culture and tradition, renowned Ukrainian artist, Vera DG, has unveiled a large painting work to depict the reach potentials in the continent.

In the drawing with a large image of a young man, Bakare Mubarak, the Sub-saharan African tallest model, could be fully viewed and seen to have been made to represent the diversity that had distinguished the continent from others globally.

This drawing that stands taller than the celebrity could be seen to have been filled with different colours that represent the flags of most African nations.

The size of the rare artwork displayed by the award-winning Visual artist was 250×208 cm and has described the painting as a medium to join the ongoing fight against racism and end the perception globally.

Speaking on the work, Vera DG, who has a keen interest in Africa’s reach culture and history, said that the colourful background of the artwork was to transform the sounds of African music into an image that could be seen and feel.

She added that the bright national dresses, and dances, crafts, art, and culture were represented with the bright colours and rhythms, saying symbolically I used colours of Pan-African flags.

According to her, the red represents the blood that unites all people of Black African ancestry, and shed for liberation; Black: for the people whose existence as a nation, though not a nation-state, is affirmed by the existence of the flag; Green: the abundant and vibrant natural wealth of Africa, the Motherland.

The visual artist disclosed that the face on the artwork was that of Bakare and that the face was picked as a symbolical image of all African history that became the centre of interest.

Vera DG stressed that the face which bears the history of the African continent was filled with calligraphic marks that further narrates the struggle embarked upon by the over 50 countries before they became sovereign states.

Using Canvas, Acrylic, mixed media to disseminate the message, the Visual artist said that the work was conceived after “being inspired by the extraordinary personality of Bakare Mubarak, the Tallest Model In Sub-Saharan Africa, also an African Culture and Youth Ambassador, African art Enthusiast and promoter and an International Humanist.

“I really like to study the history, culture, writings of different nations of the Planet. I was curious to dive into the history of Africa through contact with an interesting personality, a Cultural Ambassador from Nigeria, Bakare Mubarak. I have painted his portrait on a huge canvas”.

Speaking to newsmen after he came in contact with the artwork, Bakare described the drawing as an encouragement and a reminder that he must work more for the development of the continent.

According to the model, I am humbled, as I have been immortalized by one of the finest Calligraphy Artists alive, as such having my footprints on the sands of time.