Uber, Bolt drivers take to street over high commission, others 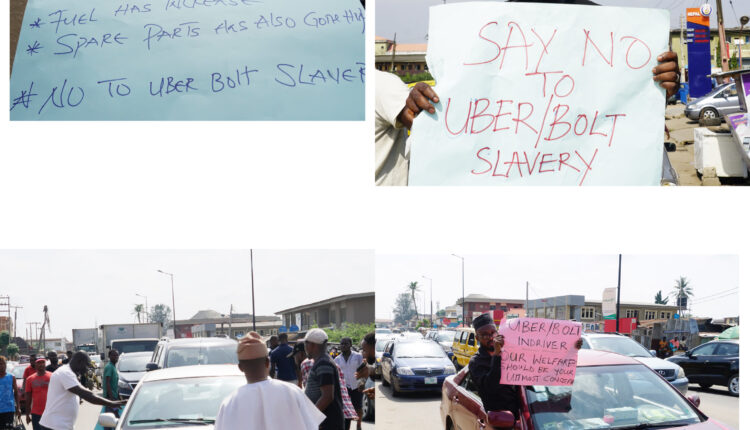 Dozens of drivers under the electronic-hailing cab services, Bolt and Uber, have taken to Lagos streets to demand a reduction in commission charged on each trip, proper profiling of drivers on the platforms, and fare review through the platforms in the country,

The drivers under the aegis of Professional E-hailing Drivers and Private Owners Association (PEDPA) during the protest called for an immediate upward review of e-cab fares to reflect the current economic reality in Nigeria which they described as unfavourable to businesses in Nigeria.

Aside from withdrawing their services, the protesters on Monday have threatened to paralysed commercial activities across the state if the Federal and State governments did not intervene to correct the anomaly between the e-hailing operators and drivers.

The drivers, who defied the scorching sun, were armed with placards with different inscriptions to express their displeasure over the current challenges that had affected their operations in Lagos State.

Some of the inscriptions include; No to Uber, Bolt slavery, Reduce commission, Fuel has increased, the spare parts have also gone high, increase fare charges, proper profiling of drivers, and others.

The Guild interviewing the Professional Daily Drivers and Private Owners Association vice president, Idris Sonuga, he enumerated the demands of the drivers thus “proper profiling of all riders patronizing our services, upward review of the fares to meet the current economic reality, review of all accounts blocked unjustifiably, adequate welfare packages for drivers and compensation to the family of those that lost their lives or permanently disabled and cancellation of Individual engagement among others,”

“We are doing this rally to show that we have been short-changed in our safety. What we are asking is the basic necessities in life. The application we drivers are using is not safe, so many of our drivers are missing in the course of service and in the morning we find their dead bodies on the road, which we cannot trace the killers, perpetrators because our clients were not well profiled on the company application. Some riders registered with different types of names,” he said

The National President explained that in the business, they owned the cars used in delivering services, they attend to all expenses incured on the vehicles, stressing that they bore all the cost of production on the car. He said they don’t have the contraction obligation to have a say even in the price of the services they are rendering.

According to him, the challenges are causing our industry to retrogress. As of today, you can hardly see a car of  2015 on our platform because the industry is retrogressing, Even the car of 2013 on our platform still looks shabby, why because somebody is taking a humungous commission.

The Nationa President further explained that the e-hailing companies charged  20% to 25% from a trip and imposes all charges on the drivers without any synergy. He added that, at every given opportunity, the companies reduce their gain by slashing the price paid by riders for services rendered to them without the driver’s consent.

He said “In another area, we have what we called a ‘fair hearing’, even if you one is at fault in the court of law, he would still be allowed to express himself before judgment but Uber and Bolt would block us at will just for frivolous excuses.

“All these are affecting us. For example, a person collected higher purchase cars for  N3.2 million, N5 million, and N4 million with different cars.”

He stressed that the drivers kept suffering every day because of the companies policies, saying the companies don’t carry them along with information and that if the companies have messages to disseminate, they do it through email and engage them individually.

The National President, speaking in Alimosho, said other protesters protesting against their challenges were in Ifako Ijaiye, Agege, Eti Osa, Ikorodu.

He added the drivers have their formation, “where the head of this formation is the national body. When they liaise with the national body, we believe that is a voice for everybody. With that, we can be sure that we are partnering with you and you are not shortchanging us in the partnership.”

“Our plan is to continue with the strike until our demand is met, We are doing this under the umbrella of profession hailing drivers and private owners association, the body that is registered with the Corporate Affairs Commission (CAC), also affiliated with the Trade Union Congress of Nigeria and also recognized by the International Labor Organization, and the organization of Trade Union of West Africa (OTUWA),” he said.