Shooting Stars of Ibadan and issues ahead NPFL new season… 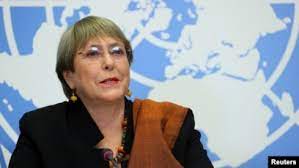 It was also learnt  that Bachelet would spend six days in the country and visit China’s president, Xinjiang, on the need for law enforcement agencies to stop the unlawful arrest of Muslim ethnic Uyghurs across the country.

The commissioner’s visit to China was said to be her first trip after her reappointment since 2005 and that it could lead to an endorsement rather than scrutiny of China’s rights record.

In a statement by the commissioner, she confirmed that her visit would be mainly on settling dispute between China and its counterpart.

“The purpose of her visit is really focusing on a dialogue with the Chinese authorities on a range of domestic, regional and global human rights issues.”

Other human rights groups said that if Bachelet does not press China hard enough, her post-trip report may not give a full picture and could be used by Beijing to justify its actions in Xinjiang.

According to the World Uyghur Congress spokesperson, Zumretay Arkin, urged Bachelet to ensure that her team can move freely, access all detention facilities and have unsupervised contact with Uyghurs.

“We are concerned the trip might do more harm than good. China could use it for propaganda purposes

Meanwhile, in reply, China has repeatedly denied any mistreatment of Uyghurs, as well as the existence of any camps, then later admitted it had set up vocational training centres with dormitories where people can voluntarily check themselves in to learn about law, Chinese language and vocational skills.

An atheist ruling Communist Party also said that such centres are necessary to curb the Three Forces of terrorism, separatism and religious radicalism in Xinjiang, which borders Central Asia on China’s north-western frontier.

Earlier, the United States has sanctioned Chinese officials who were accused of human rights abuses in Xinjiang in 2020 and 2021, and has imposed bans on goods produced in Xinjiang over concerns of forced labour.

Beijing has also denied Western allegations of forced labour, genocide and human rights abuses and repeatedly warned other countries not to interfere in its domestic affairs.