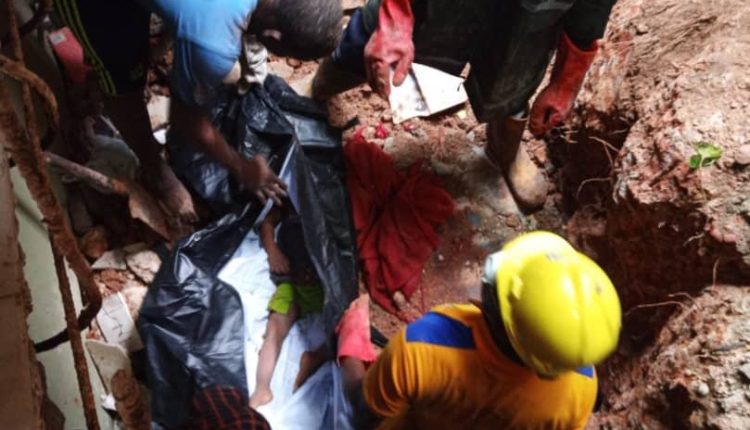 Following downpour recorded in Lagos on Wednesday, at least two teenagers have been confirmed dead after a storey building sited on 46 Gafari Balogun Street in Ogudu axis of the State caved in.

As gathered, the identity of the deceased was yet to be known but eyewitness confirmed that the two teenagers were a male and female who lost their lives after the building collapsed on them.

The Guild gathered that bodies of the teenagers were recovered under the rubbles by officials of the Lagos State Emergency Management Agency, LASEMA, and other emergency responders in the state.

An eyewitness told our correspondent that the tragedy occurred at about 12.40 pm and that it was reported to have been caused by a mudslide experienced at rear of the building.

Confirming the development, Director-General of LASEMA, Dr. Femi Oke-Osanyintolu, stated that search and rescue have been completed at the scene and that two persons lost their lives and property destroyed.

Oke-Osanyintolu, in a statement made available to newsmen, hinted that Structural Integrity Test (SIT) would be conducted on section of the building yet to cave in basically to ascertain if it was habitable.

“On arrival at the scene by agency responders, it was observed that a building collapsed as a result of a mudslide at the rear of the building caused by heavy rainfall.

“The agents were informed that two teenagers, one male, and one female were trapped and immediately commenced a search and rescue operation.

“Unfortunately, they were found dead and their remains have been transported to the mortuary. Integrity testing will be carried out on the remainder of the building which has now been cordoned off”.