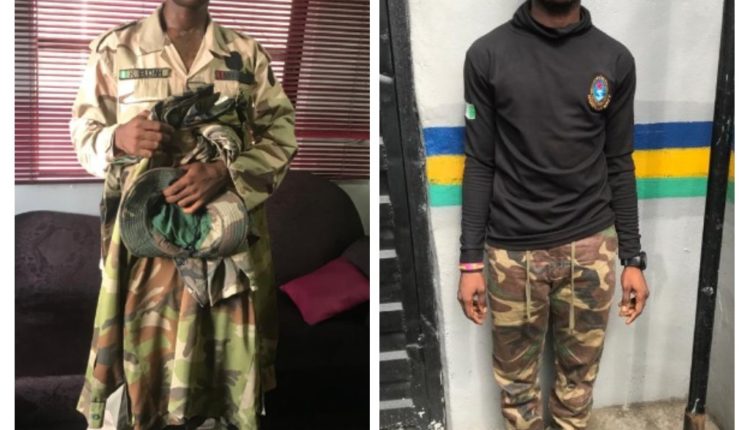 Share
By Monsuru Olowoopejo
Two soldiers have been placed under detention by the Lagos Police Command over alleged murder of a police Sergeant, Onalaja Onajide, attached to Ilemba Hausa Division, Ojo Local Government.
The two soldiers, Kehinde Elijah, 45years old, who resides at Ibiyeye Street, Whitehouse Bus Stop Okokomaiko and Ezeh Joseph, were member of a gang that attacked the Ilemba Hausa police division to retrieve a commercial motorcycle popularly called Okada from the state.
It was gathered that Elijah and Joseph, who resides in Ajangbadi axis, were arrested separately by the law enforcement officers after the attack that claimed the live of the officer and left the Divisional Police Officer (DPO) with severe injuries.
Elijah, who was said to be among the three suspects on Police wanted list for violent crimes, was arrested with four pairs of military fatigues recovered from his house.
The suspect, after his arrest, claimed to have deserted the military in 2015 when he was deployed to the North east to participate in the fight against insurgency.
Residents claimed that the suspect had been in Ojo area since absconding from the frontline and had been terrorizing members of the public.
Frank, who was arrested on Sunday at his residence, claimed to have deserted the military while undergoing basic military training.
Confirming their arrest, the Police Public Relations Officer (PPRO), Bala Elkana, in a statement made available to The Guild, disclosed that the suspect attacked the station last Sunday at about 21:40hours.
Elkana added that during the attack late Onajide and the DPO sustained severe gunshots injuries, saying, while the DPO survived the attack, the deceased died hours later.
The PPRO said: “Investigation led to the arrest of the two. The first suspect was earlier at the Station to solicit the release of his motorcycle which was impounded by the Police for violating the ban on the use of commercial Motorcycles.
“Not happy with the DPOs refusal to release the motorcycle to him, he decided to launch the deadly attack. Investigation is ongoing. The suspects will be charged to Court soon”.