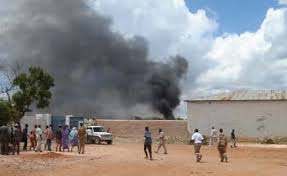 The Somali Government has confirmed that two soldiers attached to the country’s Special Force died and a United State national sustained varying degrees of injuries when a bomb blast occurred in Jana Cabdalle village.

It was gathered that the suicide car bomb that left the US soldier injured exploded outside the Special Forces base in Jana Cabdalle village.

According to reports, Somali Democratic Republic is currently battling with a 20 years civil unrest which has left many of the citizenry dead and thousands of others injured.

The Director of Communications of Jubbaland state palace, Mohamed Sabriye,  on Monday, who spoke on behalf of the government, said that two Somali special forces soldiers were killed and a US officer, who is seriously wounded in a car bomb, while speaking to Reuters.

Sabriye also added that the suicide car bomb explosion occurred outside the special forces base in the country’s south, a regional Somali government

Asides the causalities recorded at the Special Forces  base, due to the suicide car blast, two other people were also reported wounded in the attack in Jana Cabdalle village, some 60 km from the port city of Kismayu in the regional part of Somalia.