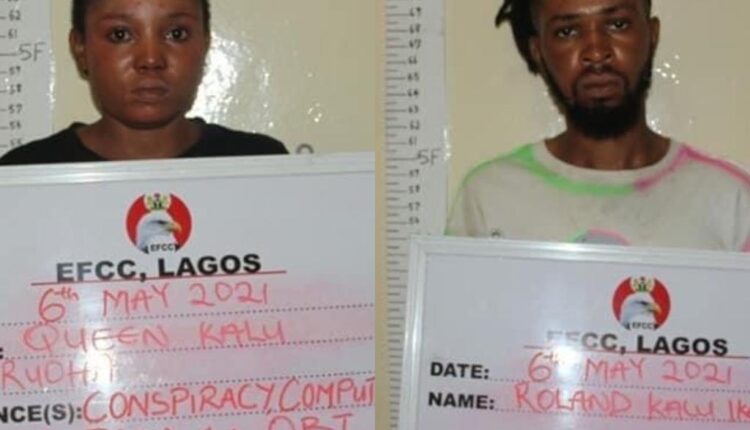 No fewer than two siblings may be sentenced to jail terms after the Economic and Financial Crime Commission (EFCC) may have charged them on various fraudulent actions including computer-related fraud and online dating scams.

As gathered, the suspects, identified as Queen and Rowland Kalu were said to have been arrested by personnel attached to the anti-graft agency’s Lagos Zonal Office on May 5, 2021, for their alleged involvement in cybercrimes.

Confirming the arrest, EFCC’s Head of Media and Publicity, Wilson Uwajaren, said that the suspects were arrested at the Amikanle Alagbado axis of the State.

The EFCC spokesman stated that Queen, said to be a graduate of Banking and Finance, confessed to the crime leveled on her, “saying that she was involved online dating and had made some money from the crime.

“She also disclosed that she helps her brothers, including one Prince Kalu who is at large, to speak to their male victims and defraud them of their money.”

Uwajaren, in a statement made available to newsmen on Thursday, stated that their arrest by EFCC personnel followed actionable intelligence on their alleged computer-related fraud.

The EFCC spokesman further listed items recovered from the suspects to include Mercedes Benz car and mobile devices. He added that the suspects have made useful statements and would be charged to court as soon as the ongoing investigation was concluded.

Meanwhile, No fewer than eight suspected internet fraudsters have been detained by the anti-graft agency over alleged involvement in internet-related frauds.

As gathered, the suspected internet fraudsters, who were between the ages of eighteen and twenty-nine were said to have been apprehended by the anti-graft agency’s Abuja Zonal Office on May 6, 2021.

The commission stated that the suspect’s arrest followed series of intelligence on alleged Internet-related crimes of the syndicate.

According to the statement, the suspects were arrested at Jabi, Abuja. The apprehended crew members in custody of the anti-corruption agency were: Emmanuel Anyeba, Precious Samuel, Mujib Ariyo, Micheal Ogaba, Mathew Ibeh, Jamiu Ariyo, Precious Kalu, and Isaac Sunday.

Also, the statement stated that the investigation indicated that the suspects operated an academy for training internet fraudsters from their hideout.

The statement further disclosed items recovered from the suspects to include eight mobile phones. EFCC said the suspects would be charged to court as soon as the ongoing investigation was concluded. 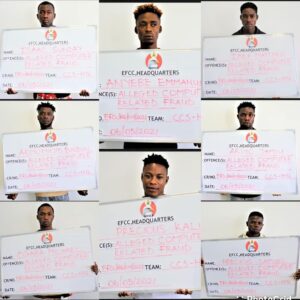