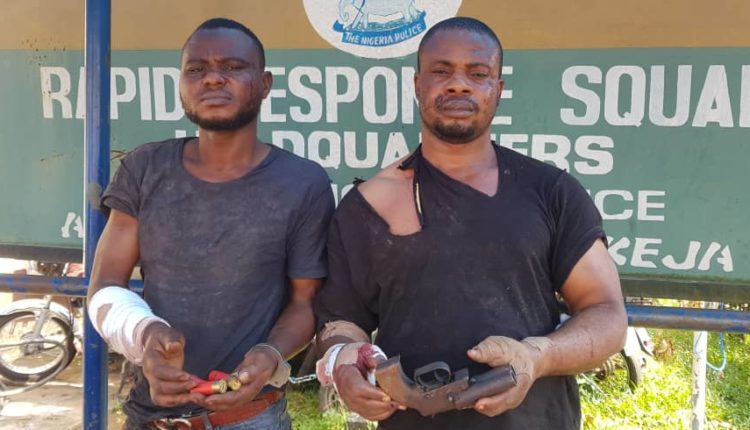 Two suspected robbers, who are also members of Aiye and Eiye Confraternities have been arrested by the Operatives of Rapid Response Squad after a failed attempt to dispossess two occupants of a vehicle in Iyana Ipaja, Alimosho Local Government, Lagos State.
The suspects, Abbey Kolawole, (40), Ikenna Eze  (30) and Femi (now at large) had accosted two occupants of a vehicle, who were having private discussions.
It was gathered that the occupants, on noticing the acts of the suspects, locked and rolled up themselves in the car before the suspects got to their car.
According to both suspects, the leader of the gang, who was brandishing a gun, ordered the occupants to alight from the car but they refused.
“He shot into the air and threatened to shoot the occupants. He was attempting to fire the second shot when the locally made double barrel gun hooked”, he noted.
By this time, the residents of the area had emerged to check what was happening. The robbers fled in different directions and abandoned their gun.
While the leader of the gang escaped, both Kolawole and Eze were unlucky as residents who they were scaling their fences apprehended them and handed them over to the officers of Rapid Response Squad, who intercepted distress call of a robbery in the area.
According to Eze, Femi invited the gang out to the house of a resident of Shagari Estate, Iyana – Ipaja with the intent of killing him.
He had stated in his statement to police that one of the occupants of the vehicle, had threatened to kill Femi.
Eze further stated that the man they attacked had earlier besieged Femi’s residence in Agege Abattoir in the company of many cult members and threatened to kill him. But Femi in retaliation wanted to maim the man first.
He added that their “plan was to shoot the man in the leg but after firing the first shot into the air, the gun hooked and before he could reload it, the residents had converged and were moving towards us. Femi was the one who knew the road, he escaped while we, strangers in that community were arrested”.
The two suspects confirmed they are members of Aiye and Eiye confraternities. And the RRS was able to recovered from the suspects a locally made double barrel cut to size shotgun, three live cartridges, and one expended cartridge.
Commenting on the development, the Commissioner of Police, Hakeem Odumosu, commended the residents of Shagari Estate, Ipaja for cooperating with the police in the arrest of the robbers.
He urged communities in the state to partner with the police in crime-fighting, even as he ordered that the suspect be transferred to Gowon Estate Police Station, Ipaja.