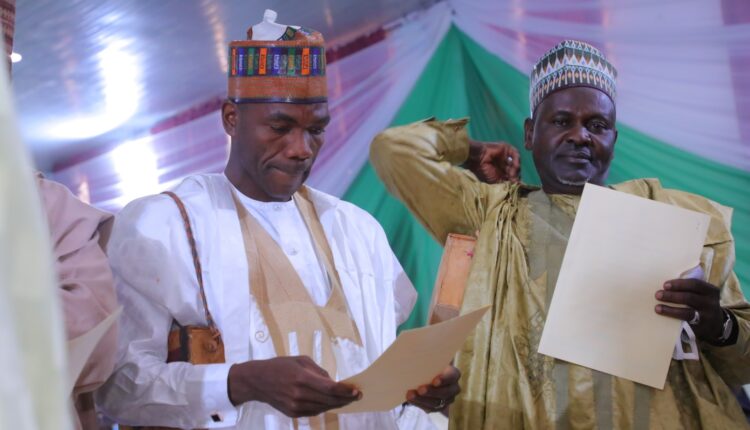 In what appears to have been informed by prolonged industrial action of Academic Staff Union of Universities (ASUU), two professors have left their classroom role at the University of Maiduguri (UNIMAID) to take up council jobs in Borno State after been sworn-in as Local Government chairmen in the state.

The duo, identified as Adamu Alooma, a Professor of Banking and Finance, also former Dean, at the UNIMAID faculty of Management Sciences, and Ibrahim Bukar, a Professor of Education, from the same varsity, were among the 27 elected chairmen of Local Government Areas (LGAs) sworn-in on Wednesday by Governor Babagana Zulum.

Both professors took part in the statewide local government chairmanship and councilorship elections held on November 28, which the ruling All Progressives Congress (APC) won with landslides. The exercise was the first council election over ten years since insurgency and Boko Haram attacks began in the state.

Speaking during the swearing-in ceremony, which took place at the Multipurpose Hall of the Government House in Maiduguri, Zulum maintained that having two professors and Ph.D. holders on board would raise the standard of leadership at local government levels.

According to him, their wealth of experience would augment our administration’s development plan and the recently launched post-Boko Haram development roadmap.

The governor, who recalled that council election was not conducted in the state for over 10 years, due to the lingering security situation in Borno, enjoined the newly elected chairmen to focus on programmes aimed at empowering the people in their respective areas.

Furthermore, he charged all the chairmen to operate in their respective local government headquarters that are safe, and also prioritise the safety of all residents in their domain.

According to him, governance will not make sense if our chairmen choose to operate from Maiduguri whereas those who cast votes from them live in local government areas outside Maiduguri.

Zulum, however, directed the Ministry for Local Government and Emirate Affairs to immediately release to elected chairmen, all funds allocated to the 27 local government councils from the federation account so they could begin to impact lives at the grassroots.