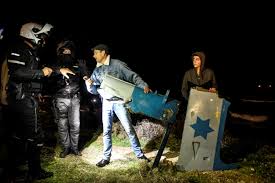 No fewer than two pilots have been confirmed dead following an sraeli military helicopter which crashed off the coast of northern Israel during a training flight.

The deceased pilots were 38 years old, Erez Sachyani, and 27 years old, Chen Fogel, who were, both from northern Israel but a crew member was said to have survived with varying degrees of injuries.

The crashed helicopter was said to have been conducting a training flight off the Mediterranean coast, Yesterday, when it crashed near Israel’s northern city of Haifa and the two, pilots died.

Disclosing the incident on Tuesday, the country’s military stated that the incident was as unfortunate one because of its rarity in the country as the pilots were discharging their duties, adding that the families of the deceased have been notified.

Also, the military confirmed that a third crew member was moderately injured and taken to hospital,adding that it was after extensive resuscitation efforts, the two pilots were declared dead but Authorities are investigating the cause of the crash.

Reacting to the incident, The Israeli Prime Minister, Naftali Bennett, described the crash as a “very sad night” which has left the country sad particularly because the two pilots were best hands and had expertise as to flights.

“Pilots who perished in the accident were among the best of our sons. The people of Israel will not forget their contribution, night and day, for the security of the state” he said.

Expressing his condolences, the US Ambassador to Israel, Tom Nides, sympathized with the friends and families of the deceased over their loss.

“I am also praying for a swift and full recovery of the other crew member who was injured,” he said.

Responding to the development in order to avoid a reoccurrence and allow proper investigations, the Chief of the Israeli Air Force, stated that he had ordered the immediate suspension of all training flights and the use of helicopters from the same array as the doomed aircraft.

As gathered, a Haifa beach was closed on Tuesday as the search continued for parts of the helicopter, Israeli media reported.

Such accidents are relatively rare in Israel. In 2017, a pilot was killed in a helicopter crash during military training in southern Israel. A second pilot was seriously injured