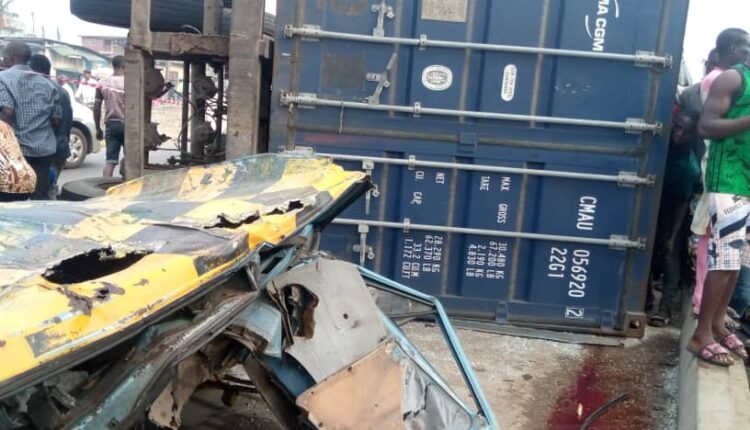 At least two persons have been confirmed dead and six others sustained varying degrees of injuries when a containerized truck fall on a commercial bus yesterday evening at Ilasamaja along Apapa-Oshodi expressway in Lagos State.

The deceased, a male, and female, and the injured persons were passengers in the commercial bus with number plate APP 127 XW that was enroute Mile 2 axis of Amuwo-Odofin Local Government

While the Lagos State Environmental Health Monitoring Unit (SEHMU) has removed the corpses from the scene for deposition at a mortuary, three most severely injured victims, including the bus driver, were already on admission at Isolo General Hospital, Oshodi-Isolo local government.

An eyewitness at the scene narrated that the tragedy occurred under the bridge at Ilasamaja bus stop when the truck with number plate SGM 715 XA, loaded with a 20-feet container, fell on a bus while laying claim to the right of way with another articulated truck.

He added that the ill-fated truck while maneuvering to ensure it outsmart another unidentified truck, fell on the commercial bus parked under the bridge for its passengers to alight easily.

Confirming the tragedy, Director-General, Lagos State Emergency Management Agency (LASEMA), Dr. Olufemi Oke-Osanyintolu, stated that the truck and the commercial bus were already recovered and handed over the Nigerian Police for onward investigation.

Oke-Osanyintolu noted that the impact of the fallen truck led to the immediate death of two passengers and that the three other passenger not on admission sustained minor injuries and were treat and discharged immediately.

“The Fallen Truck, it’s Container and the affected bus has been recovered with the Agency’s forklift and Super Metro, placed on a lay-by and subsequently handed over to the Nigerian Police, Ilasa Division.