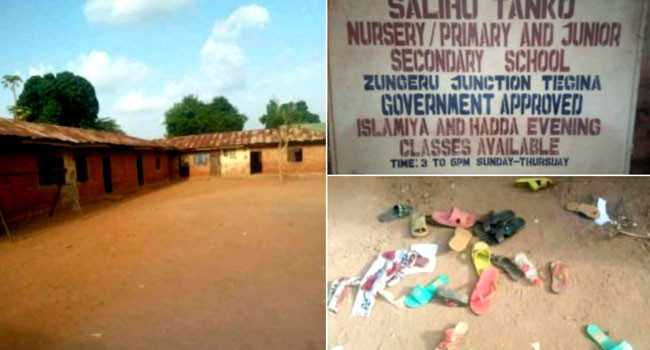 Barely four days after gunmen stormed Salihu Tanko Islamic School in Tegina, Niger State to kidnap 136 schoolchildren, two of the abducted pupils were reported to have died after suffering trauma over the possible fate of their children in captivity.

The two parents were said to have been in shock after news filtered in that armed gangs invaded their children’s learning center and abducted 136 schoolchildren after releasing 11 others that were discovered unfit for the journey across forests last weekend.

As gathered, the health condition of the deceased parents were reported to have gotten worse yesterday after the abductors demanded ransom before any of the children would be released, just as they threatened to kill the abductees if it was not paid.

Although the identity of the parents was yet to be revealed, principal of the Islamic school, Abubakar Alhassan, hinted that the abductors, during his conversation with them, assured that the children were in good health.

Alhassan, whose five children were also abducted, disclosed that after a headcount, three teachers were missing and could have been abducted by the gunmen to accompany the 136 pupils.

Confirming an actual number of abducted schoolchildren, the State Deputy Governor, Ahmed Ketso, assured parents of the abducted children that the government was doing its best for the safe return of the students, just as he reiterated readiness of the government to give continued support to the security agencies.

Ketso further disclosed that the state government has so far provided support to the security agencies including distribution of various operational vehicles to aid their law enforcement particularly surveillance across the state.
“We have so far given 89 operational vehicles, 283 operational motorcycles, 30 bicycles, 4 Tri-cycles in addition to funding the various security operations in the state that include: Karamin Goro, Sharan Daji, Girgizan Daji, Gama Aiki, Ayem Akpatuma I & II, Puff Adder I & II”, he said.
The deputy governor, who added that 70 Nissan Vehicles and 2,300 motorcycles as mobility support have been provided to the vigilante corps, said that the security agencies were doing their best but don’t have enough logistics, saying intervention from the Federal Government was needed to equip them so that they confront the bandits.
According to him, the 136 schoolchildren would have been rescued but that the security agencies were being careful in the pursuit of bandits to avoid collateral damage especially losing the children who could be used as shields by the gunmen.
To boost security across the state, the state government, meanwhile, has announced total ban of commercial motorcycles popularly known as Okada in Minna the state capital.
Ketso said that the decision was taken to ensure that the state capital is safe, however, he stated that private motorcycles are allowed to operate but with restriction from 9:00 pm to 6:00 am.