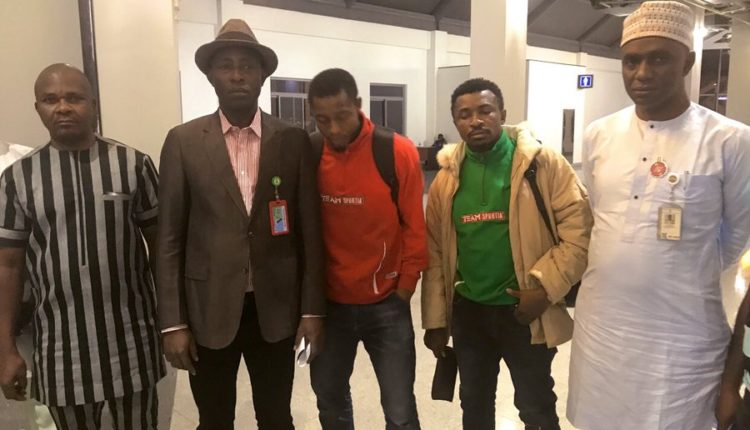 Two Nigerian students detained in Bosnia Herzegovina Border detention Camp over one month ago have been reunited with their families after regaining freedom hours before.

The two students’, Alexandro Uchenna and Kenneth Chinedu are undergraduates in Federal University of Technology, Owerri (FUTO), regained their freedom days after the Federal Government intervene in their continued detention.

Alexandro and Kenneth, who left Nigeria to attend an international table tennis competition in Croatia, but were arrested and ended up in a Bosnian refugee camp where they had been detained for several weeks.

Confirming their release, Chairman, Nigerians in Diaspora Commission, Abike Dabiri-Erewa, in a statement on his official twitter handle on Saturday, disclosed that the arrived the country safely.

She stated that the Commission earnestly wait for their safe return, after been airborne for hours, and ensure they were get reunited with their families and fellow students.

“We commend the quick intervention of the Minister of Foreign Affairs, Geofrey Onyeama, the Nigerian Ambassador to Hungary, Eniola Ajayi and staff of the mission and the unrelenting efforts of  Nigerians in Diaspora Commission staff.

It could be recalled that the two Nigerians were arrested while taking a walk around the capital on November 18 as they couldn’t produce relevant documents to the Police.

The Police Officers reportedly transferred them to Bosnia-Herzegovina border, where Croatian authorities had gathered a group of irregular Migrants making efforts to cross into the Country.