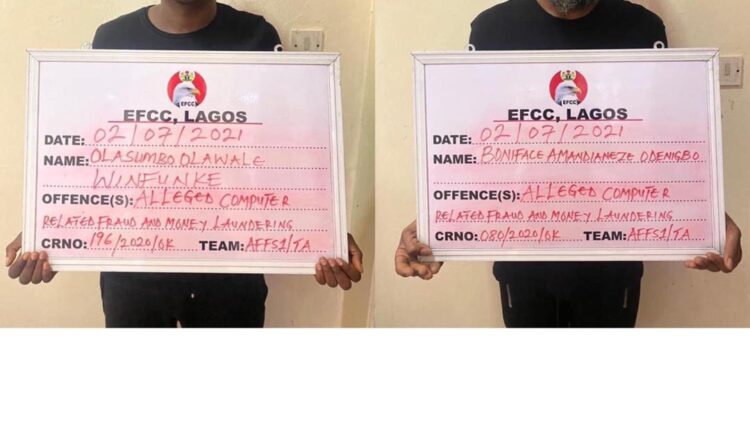 The owners of a Lagos State popular nightclub, Buzz Bar, have been arrested and detained by the Economic and Financial Crime Commission (EFCC) for their alleged involvement in various computer-related frauds and money laundering.

As gathered, the two owners, identified as Boniface Amandianeze and Olasunmbo Olawale, were reported to have been picked by personnel of the anti-graft agency attached to the Lagos zonal office.

The arrest of the entrepreneurs was announced by the Head of Media and Publicity for EFCC, Wilson Uwajaren, who stated that investigation revealed the owners of the nightclub located on Adetokunbo Ademola Street, Victoria Island.

According to the anti-graft agency’s Media and Publicity, the hoteliers were picked by EFCC officers from their house on No 2A and 2B Oniru Estate axis of the Lagos State.

Uwajaren, through a statement made available to newsmen on Monday, stated that the arrest by EFCC personnel followed actionable intelligence gathered on the suspects’ alleged involvement in romance scam, business email compromise, benefit scam, credit card fraud, and money laundering that they had perpetrated over the years.

While noting that after their arrest, four exotic cars, mobile devices, laptop computers, jewelry, and wristwatches worth hundreds of millions of Naira were recovered from them, he said that the suspects would be charged to court as soon as the ongoing investigation was concluded.

The EFCC spokesman added that further investigations have also established nexus with other associates who were suspected to be into computer-related fraud.