Lagos Govt. donates seedlings to over 650 farmers as… 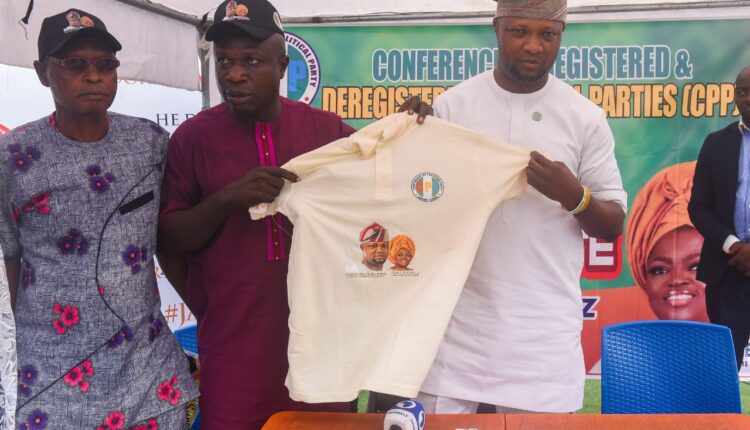 No fewer than two Governorship candidates have decided to step down from the 2023 gubernatorial race and support the leading opposition party, Peoples Democratic Party (PDP), standard-bearer, Dr. Olajide Adediran, popularly, called Jandor, as he vies to unseat the Lagos State Governor and All Progressives Congress (APC) flagbearer, Babajide Sanwo-Olu.

Meanwhile, some leaders from the opposition parties under the aegis of Conference of Registered and Deregistered Political Parties, CPP, a co-political group, have defected to PDP and endorsed Jandor as their choice governorship candidate in the state.

After the endorsement, they promised to work towards ensuring his electoral victory in the forthcoming 2023 general elections become reality.

Receiving the guber candidates in absentia, and the CPP, leadership and members, at his campaign office, Liberty Place, Adeniyi Jones Street, Ikeja, Lagos, Adediran assured that with their support, retaking Lagos from the ruling All Progressives Congress, APC, is a done deal in 2023 guber poll as the party has failed to deliver on its Promises to the people.

According to Adediran; “This is a worthwhile step you have taken today, for believing in our aspiration. We welcome you are as worthy stakeholders, for us it is more work ahead we appreciate your courage and tenacity, you will never regret your action.

“I believe we can do this together to make Lagos work for us again. Our visit to about 98 out of the 255 wards revealed total decadence of infrastructure despite years of ruling party, APC in Lagos. Absolutely, nothing is working in Lagos. We are determined to deliver the real dividends of democracy to Lagos residents by your support and general public.”

Earlier, the leader of CPP, Dr. Akin Badmus, while announcing the formal collapsing of their structure to Lagos4Lagos movement and PDP, said that the move has become necessary to rescue Lagos and residents from the shackles and strong hold of godfather and bad governance for decades.

Badmus, said, the group has a strong membership presence across the 20 LGAs and 37 LCDAs of state, which would be mobilized for the PDP.

According to him, “For record, Lagos state is the most populous city in Nigeria, Second in Africa after Cairo and 15th in the world with over 20 million population. Lagos is the 5th largest economy in Africa with a GDP of over 30 Billion dollars.

“Looking at the robust economy of the state with highest internally generated revenue in Nigeria, the dividend of democracy in Lagos is nothing to write about to compare to her robust economy, population and revenue. It is a fact that cost of living in Lagos is very high with revenue that doesn’t reflect in the development of Lagos State.

“We the CPP, is a co-political group that spread across the state with structures in 20 Local Government and 37 LCDA in the state, we have made a resolution to give all our support and mandate all our members across the state to cast their votes for Adediran popularly known as Jandor come March, 2023 in the state for the Governorship position to rescue Lagos from the hand of the ruling party APC.

“Our decision for adopting His Excellency was based on the followings: To rectify and eradicate the hardship inflict on Lagosians by “Agberos”, Majority of whom are officials of the National Union of Road Transport Workers (NURTW) and the Road Transport Employers Association of Nigeria (RTEAN) who are usually seen in white and green uniform but sometimes appear in mufti.

“To revive dilapidating infrastructure and commencement of new one: It is a fact that most roads in Lagos are now in a state of disrepair. Road users are finding it difficult to ply the roads.

“Lastly, psychological look of Governor Sanwo-olu, the body language and assessment of his governance shows that he is a puppet, ruling under the influence of a god-father. The governor felt that this coming election is going to be an easy ride for him because of his god-father.

“We must confess that he has lost popularity and he is not going to win. This is the time Lagos is taking over, PDP is taking over, APC is no longer the choice of Lagosians.

“So, today, the entire 30 political parties comprises of both registered and de-registered as well as Governorship candidates of Zenith Labour and AAP who are have decided to throw our weight behind Jandor and as such directed all our followers to begin massive campaign for the PDP in Lagos state.”