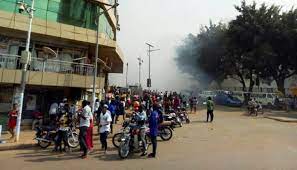 No fewer than two persons were reported to have died and several others sustaining varying degrees of injuries when a twin bomb blasts occurred in Kampala, the Uganda capital.

The explosions was said to have happened simultaneously, the first bomb blast went off very close to the country’s parliament while the other sounded near the central police station.

It was learnt that the deafening sound of the explosion simultaneously sent the parliament staff and the law enforcement officers running and scrambling for safety after shards of broken glass began to fly around.

Also, several cars belonging to parliamentary staff and law makers were said to have been wrecked by the explosion that halted activities within both axis.

While confirming the attack on Tuesday, the Uganda’s Assistant Inspector General of police, Edward Ochom, said that they were yet to unravel the people behind the attack but investigations were ongoing.

“What we can say (is) this was an attack but who is responsible is a matter that is under investigation. The explosions took place near the Central Police Station and another took place near the entrance to Parliament, all in the central business district,” he said.

Ochom said that the explosion near the police station left windows shattered while the other one close to the entrance of parliament engulfed several cars in flames the adding that the injured had been taken to hospital. he added.

The Uganda Red Cross spokeswoman, Irene Nakasiita, said that they have dispatched a team to the area to respond to the injured victims at the scene.

The executive director of Uganda’s Internet Exchange Point, Kyle Spencer, who heard the blasts said that the explosions sparked panic among many people nearby.

“The road to parliament is closed off, there are people just crying, everyone else is just trying to get away from these areas. Everybody is evacuating office buildings and the buildings are locking up and not letting anybody inside.” he said.

following the blast, the Parliament cancelled its Tuesday session asking members to avoid the area pending when security agencies working at the scene would restore normalcy to the area.

As gathered, this latest incident was said to be part of the string of bombings that have been reoccurring over the past months.

It would be recalled that the country recorded a twin blasts occurred at a eatery and a car explosion that resulted in the death of one person and left several others injured.

The Police said last month that both attacks were connected and carried out by the Allied Democratic Forces (ADF) and cautioned that extremists were believed to be plotting a major new attack.