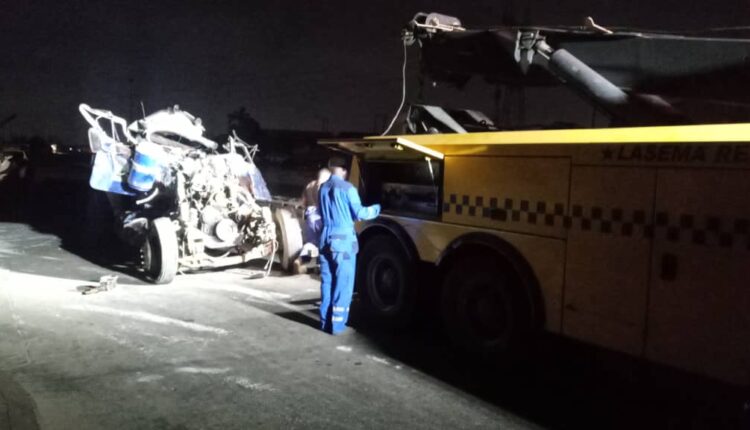 Atleast two persons have been confirmed dead and one other injured when a containerized truck rammed into another stationary at Odo-Olowu end of Oshodi-Apapa expressway, Lagos State.

While the two female corpses have been handed over to the State Environmental Health Monitoring Unit (SEHMU), the injured male was identified as the truck driver and had been taken to hospital for treatments.

It was learnt that the truck driver lost control of the vehicle due to brake failure and the container skidded off and fell on the two commuters at the scene.

Confirming the tragedy, General Manager, Lagos State Emergency Management Agency (LASEMA), Dr. Olufemi Oke-Osanyintolu, said that cause of the accident was discovered after a thorough investigation at the scene.

Oke-Osanyintolu, through a statement on Saturday, stated that the trucks have been moved off away from the road to prevent gridlock and that the corpses handed over to SEHMU.

“Upon arrival at the scene of the incident, it was discovered that a truck loaded with an empty forty feet container had a brake failure and rammed into a commercial truck park at the above-mentioned location.

The driver of the truck was rescued by LASEMA rescue team has been taken to a hospital by our ambulance service, but the two other female adult commodities were also recovered and handed over to SEHMU”.