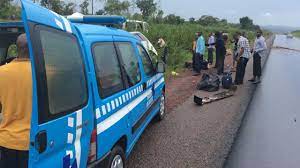 Share
No fewer than two persons have been confirmed dead while eight others sustained varying degrees of injury when a commercial bus plunged into Ososa River in Ogun State.
As gathered, the fatal crash was said to have occurred when the vehicle with number plate APP86 7XZ rammed into a stationary truck with number plate, KJA376 XN, at the Odogbolu end of the Benin – Ore Expressway.

The number of casualties recorded during the accident was confirmed through a statement released by the the Public Education Officer for the Federal Road Safety Corps,FRSC, Ogun Sector Command, Florence Okpe, and made available to newsmen on Monday.

Okpe disclosed that a total number of 10 persons were involved in the accident that resulted in a gridlock and that they comprised five male adults and five female adults.
Parts of the statement reads: “Eight people were injured and this comprised three male adults and five female Adults. Unfortunately, two deaths were recorded from the crash. According to her, The suspected cause was speed which led to the loss of control. The Injured victims were taken to the state General Hospital Ijebu-Ode while the dead were deposited at the morgue”.
Earlier, the In addition, the Sector Commander, FRSC, Ahmed  Umar  cautioned motorists on excessive speed especially at night when visibility is poor.  He further commiserated with the family and asked them to contact FRSC Ogbere Outpost  for more information.