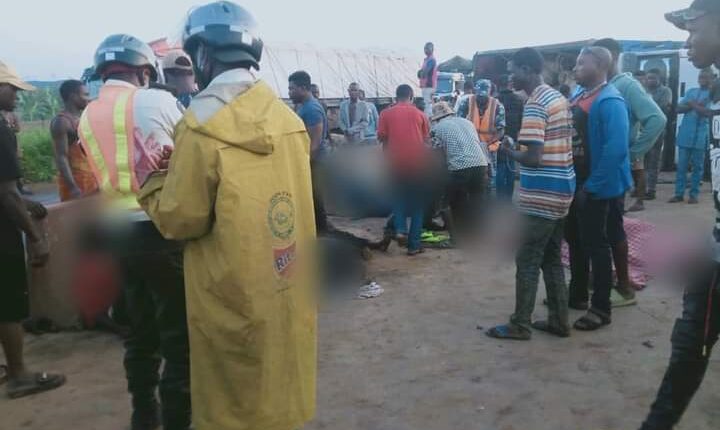 No fewer than two persons were confirmed to have died while 15 others sustained varying degrees of injuries when a speeding truck overturned at a diversion point along the Lagos-Ibadan Expressway, Ogun State.

It was learnt that the vehicle travelling towards Lagos was conveying bags of onions that was also accompanied by some passengers when the incident occurred at the Eldorado end of the expressway.

As gathered, the accident occurred around 6.30am yesterday and led to a gridlock after the truck emptied the onions on the road, preventing vehicular movements on the ever busy road.

He said, “According to eyewitness account, as the vehicle was approaching the diversion bend, the driver lost control, probably as a result of speed.

” It oveturned in the process, spilling all the onions it was carrying on the road, together with the 17 passengers atop the truck.

“Two of the passengers died on the spot while 15 others were injured. The rescue agencies at the scene of the crash were the TRACE, Police, Federal Road Safety Corps, Nigeria Security and Civil Defence Corps and JBN.”

He commiserated with the families of the deceased and warned drivers to reduce their speed while approaching diversion and construction zones in view of its attendant consequences.