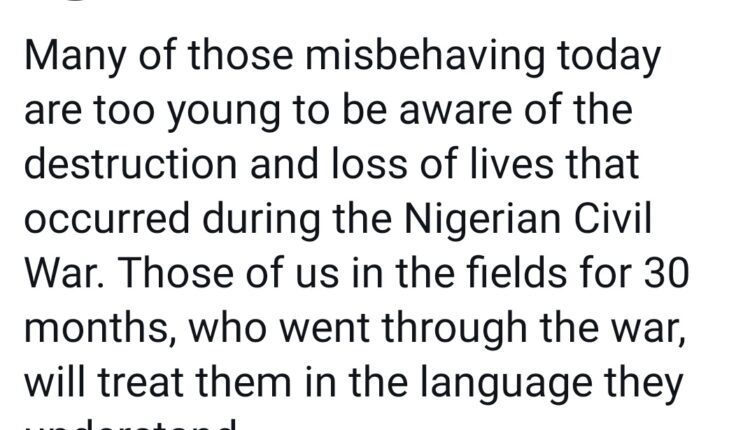 American microblogging and social networking service, Twitter, has pulled down a post by President Muhammadu Buhari, on the Biafran war of 1967-1970 and also including writes said to have meant subtle threats of genocide against an ethnic group in the country.

The social media giant explained that the post violated its rules and it had become imperative the company exerts its oversight power by deleting the write-up and barred access to it by Nigerians and non-Nigerians alike.

It would be recalled that the president had in series of tweets yesterday on his handle, wrote “many of those misbehaving today are too young to be aware of the destruction and loss of lives that occurred during the Nigerian Civil War. Those of us in the fields for 30 months, who went through the war, will treat them in the language they understand.”

Reacting to Twitter’s decision on Wednesday, the Minister of Information and Culture, Lai Mohammed, accused the social media company of been biased, saying Twitter was playing double standards on domestic issues in Nigeria.

He said it was saddening that the company ignored inciting tweets by the leader of Indigenous People of Biafra (IPOB), Nnamdi Kanu, and his cohorts looked away during ENDSARS protest but found the president’s tweets offensive.

“Twitter may have its own rules; it’s not the universal rule. If Mr. President, anywhere in the world feels very bad and concern about a situation, he is free to express such views. Now, we should stop comparing apples with oranges. If an organisation is proscribed, it is different from any other which is not proscribed.

“Two, any organisation that gives directives to its members, to attack police stations, to kill policemen, to attack correctional centers, to kill warders, and you are now saying that Mr. President does not have the right to express his dismay and anger about that? We are the ones guilty of double standards.

“I don’t see anywhere in the world where an organisation, a person will stay somewhere outside Nigeria and will direct his members to attack the symbols of authority, the police, the military, especially when that organisation has been proscribed. By whatever name, you can’t justify giving orders to kill policemen or to kill anybody you do not agree with,” he said.

On his part, an aide to former President Goodluck Jonathan, Reno Omokri, commended the social media giant for wielding the big stick and saving Nigeria from possible implosion.

“I commend Twitter for deleting General Muhammadu Buhari’s tweet threatening Civil War 2 on the Southeast of Nigeria. That was a most irresponsible tweet, and Nigerians are indeed grateful to Jack Dorsey for taking that action. But please do not stop there. Delete his account.

“He is a menace to the world. If you can delete Donald Trump’s account on the grounds that you suspected him of instigating the 2021 storming of the United States Capitol, then why still allow Buhari’s account to remain live on Twitter after he threatened to repeat a war that killed at least 1 million Biafrans, especially children, and infants?”