FG threatens health workers with ‘no work, no… 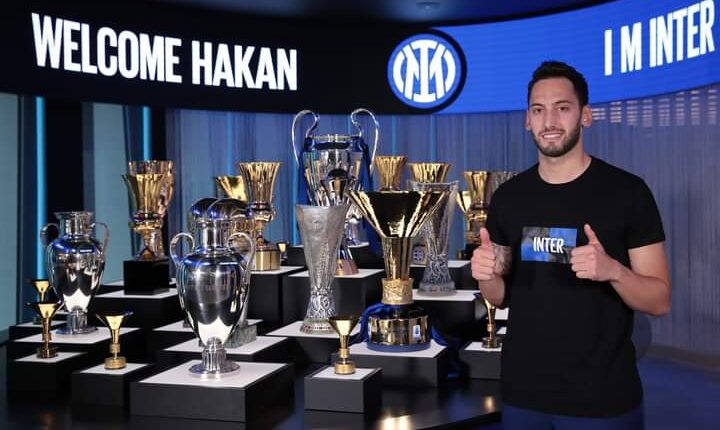 As part of an effort to close up the vacuum left by Christian Eriksen, Inter Milan has completed the signing of Turkish creative midfielder, Hakan Calhanoglu, from their city rival, AC Milan, ending plans by the player’s previous employers to extend his contract after its expiration.

Inter had been in the market for an attacking playmaker onto their books after seeing Eriksen suffer a cardiac arrest while representing his country, Denmark, at the ongoing Euro 2020 and was yet to be certified by medical experts to be fit for football even with fitting of a defibrillator on him.

Regardless of the outcome, Inter Milan, who was popularly called the Nerazzurri, has confirmed the signing of Turkey international on a three-year deal, to ensure the team lig.

In a statement released on their official website, Inter said: “FC Internazionale Milano can confirm that Hakan Calhanoglu has joined the Nerazzurri. The 27-year-old midfielder has signed a deal with the club lasting until 30 June 2024.”

It was gathered that Milan’s offer was €4 million per season plus a bonus of around €500,000, which they first made in January and never raised, despite Calhanoglu’s hesitation to sign renewed terms. Instead, he will reportedly earn €5m plus a €1m bonus at Inter.

Losing Calhanoglu represents another blow to the Rossoneri, while Inter, who now has Simone Inzaghi in charge following Antonio Conte’s departure, were working to ensure that they remain competitive at home and in Europe for 2021-22.

Aside from Calhanoglu, the club was unable to convince highly rated goalkeeper Gianluigi Donnarumma to stay put, with the 22-year-old Italy international closing in on a move to Paris Saint-Germain (PSG)

Milan has seen striker Zlatan Ibrahimovic commit to a new one-year contract at San Siro, while Fikayo Tomori’s loan from Chelsea has been turned into a permanent transfer.