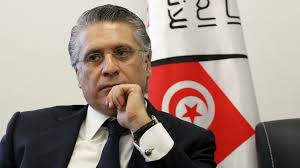 A Tunisian has ordered that a presidential candidate, Nabil Karoui, 56,  should be remanded in prison custody after failing to win an appeal to be freed.

Karoui was detained last month on charges of money laundering and tax fraud, and with the latest development, makes it the third time he has had an appeal turned down.

On Wednesday, a judge refused to rule on whether or not Karoui,  who reached the run-off vote which is expected next month ,would be released, adding that the matter was not in his jurisdiction.

With the verdict, it means Karoui, who began a hunger strike earlier this month to demand his freedom, will remain in jail.

His lawyer, Kamel Ben Messoud, has said his client would challenge the court’s decision.

Karoui, who is a media mogul, has never held political office but he is a philanthropist founded a focusing on fighting poverty and that issue has been a central theme of his campaign.

But critics have accused him of using the charity and his TV channel to further his political ambitions.