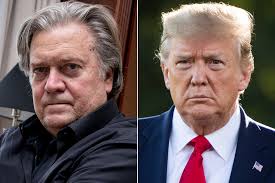 As stated, the campaign raised about $25 million for building the wall, having promised donors that funds raised would be used to finance the purpose of the campaign and that Bannon, through a non-profit organization under his control used more than $1 million of the funds to secretly pay for personal expenses.

The prosecutors listed others charged with the former presidential aide to include Brian Kolfage, Andrew Badolato, and Timothy Shea, for their involvement in using funds donated to an online crowdfunding campaign called “We Build the Wall” meant for Mexico border wall for financing lavish lifestyles.

The Acting Manhattan US Attorney, Audrey Strauss, noted that Kolfage, the founder and public face of “We Build the Wall” diverted more than $350,000 of the donations for his personal use and secretly schemed to pass hundreds of thousands of dollars to fund his lavish lifestyle.

CAN rejects new regulation on churches