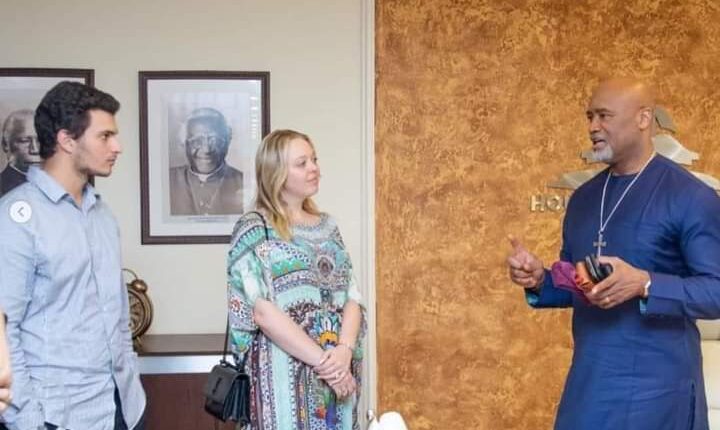 The daughter of an immediate past president of United States (US), Tiffany Trump, and her fiancé, Michael Boulos, have paid a visit to the House On The Rock Church in Lagos State.

During the visit to the church, the former president’s daughter and her fiance were received by the General Overseer of the religious centre, Paul Adefarasin, in the state.

Adefarasin confirmed the visit in a post on his Instagram handle yesterday and described their visit to his church as a fellowship hour with Donald Trump’s 28-year-old daughter and Boulos, a son of a Lebanese-Nigerian-based businessman.

In the picture released by the clergyman, Tiffany and her 24-year-old fiance were seen listening attentively to Adefarasin during their discussion within the church premises.

Adefarasin, in another post, said one of the main highlights of his “past weeks was meeting Tiffany Trump and Micheal Boulous, who are engaged and thriving in their journey!!”

“It was also particularly special to have spent this evening with some very dear friends, Tony & Oma Attah, Jide & Sola Coker, Nkiru Anumudu, Toyin Saraki, my beautiful wife Ifeanyi, and the hosts and parents of the couple, Sarah & Massad Boulous.

“To Tiffany and Michael, thank you for being open with us and sharing your beautiful stories. This is just the beginning, so my advice to you, is to enjoy the process”, Adefarasin added.

Tiffany and Boulos visit to the church came barely a year after they got engaged with the young Boulos presented to Tiffany a 13-carat emerald-cut diamond from Dubai said to be worth $1.2 million.

Tiffany’s fiance has been described as a heir to the billion naira investments and was was raised in Lagos and is a naturalized Nigerian.

His father, Massad, is the Chief Executive Officer of SCOA Nigeria. His mother, Sarah, is the founder of the Society for the Performing Arts in Nigeria.

His family moved to Lagos when he was an infant and attended the American International School of Lagos in Nigeria before proceeding to London, where he obtained his Bachelor of Arts in Global Business Management from Regent’s University in 2018.

He also bagged a master’s degree in Project Management, Finance, and Risk at City, at the University of London in 2019.

Boulus has been the associate director of SCOA Nigeria since 2016, the director of Fadoul Group since 2019, and the business development manager of Royalton Investment since 2019.

Tinubu and Osinbajo: The real political choice for Yorubas