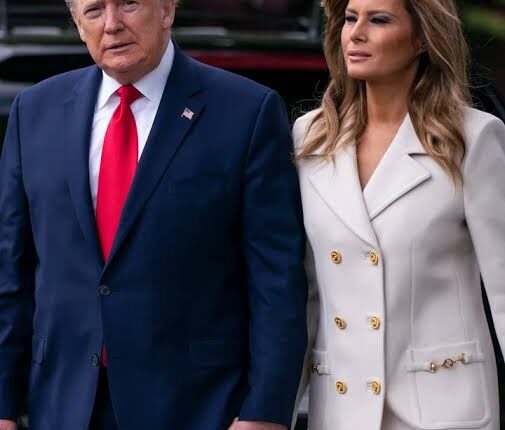 United States President, Donald Trump, and his wife, Melania, have tested positive for coronavirus and have proceeded into self isolation to begin treatment protocol for the deadly respiratory disease.

As stated, the first couple were yet to show any symptoms and that they are in great shape healthwise for the quarantine process to recovery journey.

President Trump who confirmed their positive status said that he was hopeful that he, alongside Melani, would defeat the disease and come back stronger to continue in the task of ‘making America great again’.

Trump, through a post on his social media page on Friday, wrote “Tonight, @FLOTUS and I tested positive for COVID-19. We will begin our quarantine and recovery process immediately. We will get through this TOGETHER!”

Meanwhile, the White House physician said Trump and Melania are “both well at this time” but he did not specified if they were showing symptoms of COVID-19, the disease caused by the coronavirus.

Trump had said several hours earlier that he would begin to quarantine, after his senior adviser Hope Hicks was confirmed to have contracted the disease caused by the novel coronavirus.

Trump did not say how long he and the first lady would quarantine for.

The result comes five weeks before the U.S.’ November 3 election. Trump’s handling of the pandemic has been repeatedly criticized by Democratic candidate, Joe Biden.

Late on Thursday, the president confirmed during a Fox News interview that Hicks had tested positive.

“She did test positive, I just heard about this,” Trump said during an interview with Fox News.

Trump appeared to suggest Hicks may have been infected by a member of the military or police.

“I was surprised to hear with Hope, but she’s a very warm person with them. She knows there’s a risk but she’s young,” he added.

He and Melania have spent a lot of time with Hicks, Trump said.

Hicks is among Trump’s closest advisers and often travels with him. After the interview Trump tweeted that he would begin to quarantine.

The presidential adviser is among over 7.2 million Americans, who have tested positive for the virus. More than 200,000 have died.

Trump is often seen in public without a mask, which the White House has justified by saying the president and those he has close contact with are regularly tested for the virus.

The White House in a statement said steps are taken to limit COVID-19 exposure to the president and that all plans and procedures incorporate guidance from the Centers for Disease Control and Prevention (CDC).

“The president takes the health and safety of himself and everyone who works in support of him and the American people very seriously,” White House spokesperson Judd Deere said.