JUST IN: Another two coronavirus patients die inside Lagos… 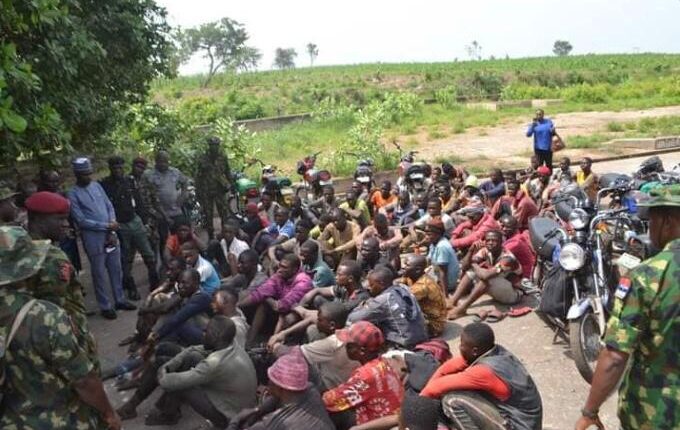 No fewer than 73 youths from Nasarawa State were intercepted by troops of the 72 Special Forces Brigade, Nigerian Army, Makurdi, Benue State.

The young men were said to be heading for Imo State when the soldiers, who were working on an intelligence report, intercepted them at the Agan tollgate, area of  Makurdi, on Monday.

It was gathered that the men were being transported inside five trucks, that contained 47 motorcycles, sacks of minerals loaded from Plateau State for delivery at a Port Harcourt-based company.

The Benue State Deputy Governor, Benson Abounu, who visited the scene yesterday, commended the military personnel for their vigilance and conduct.

Abounu stated that despite attempts to evade arrest, the soldiers were able to stop the trucks and apprehend the men.

The deputy governor  said what he had seen and heard were contrary to the speculation that a truck loaded with arms and men to attack the town was intercepted, adding, “No arms were found after a thorough search conducted by the soldiers.”

He wondered how such a large army of young men from the same state could be found together and going to a place like Imo State, “which they know to be experiencing serious security challenges at the moment.”

Abounu charged the Army to thoroughly profile the young men to ascertain the actual mission of their trip and possibly fish out those who provide questionable responses.

Earlier, the Commander of the 72 Special Forces Brigade, Lt. Col. A. D. Alhassan, said he and his men acted based on a security report and intercepted the trucks immediately they got the hint that they were heading towards Makurdi.

The commander said his men spent some hours waiting for the travelers before they finally got to Makurdi at night.

Alhassan confirmed that no weapons were found after a thorough search was conducted on the passengers, goods in the trucks, and motorcycles.

One of the young men, who identified himself as Emmanuel Ayugwa, said they were going to Imo State for okada business.