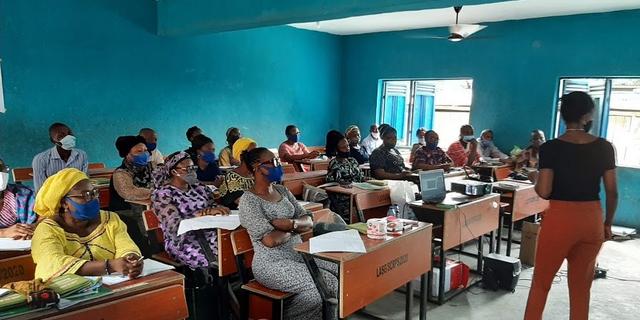 It is widely acknowledged that human beings are one of the most important resources for development. As precious as they are, they require a tremendous amount of nurturing, development and motivation in order to elicit the best from them. It, therefore, follows that their productivity depends largely on how well they are trained, empowered and motivated.

At the government level, knowledge and skills in the civil service play a major role in the efficiency and effectiveness in rendering service. It is this knowledge that defines the speed, accuracy and consistency of civil servants while right attitudes shape their behaviour and conviction to offer quality service. All these must inevitably be embedded in training content for workers.

It is against the background of recognizing the significance of developing human resources that the State Government at the inception of the Administration of Babajide Sanwo-Olu prioritized capacity building as a fundamental force to achieving its T.H.E.M.E.S agenda. The State Government was unequivocal in its resolve and this determination was predicated on the belief that a well trained and equipped staff will be able to push for quality service and meet the set strategic development goals. This was further accentuated by the fact that Public Servants are at the epicentre of implementing the six pillars of the development agenda.

In this regard, a series of reforms were carried out in most sectors of Government and a critical aspect of the reform was the public sector which focuses on manpower and capacity development. One of the significant outcomes of the reform was the launch of the Learning Management System (LMS) which is the first of its kind in the Public Service of Nigeria. It is a technology-driven platform for the training of civil servants intended to drive radical change in the public sector to address the capacity deficit, enhance efficiency and competence amongst civil servants.

The programme, for all its usefulness, has a variety of learning contents with over 4,000 free, self-enrollment courses and 8,000 courses from the LinkedIn Learning Library even as the courses are certificated. And so, the over 42,000 staff, drawn from various ministries, departments and agencies, who have been onboarded onto the platform, have access to these myriads of global courses and programmes.  From the platform, the state government can seamlessly administer, document, track reports and deliver educational courses and training programmes for staff in the State’s civil service.

Whilst the implementation of the Learning Management System meant that Government is investing massively in information technology, a direct result of this initiative is the upsurge in the number of trained public servants. It is on good authority that several staffers of the state government have undergone one form of training or the other since the launch of the programme.

In particular, about 28,000 public servants irrespective of cadre have benefitted from online courses this year alone. This figure is different from those involved in physical (face-to-face) training and many micro webinar series. This figure was confirmed recently by the Honourable Commissioner for Establishments, Training and Pensions, Mrs Ajibola Ponnle. By arithmetical calculation, it is estimated that at the end of the Babajide Sanwo-Olu Administration, all of the State Public Servants would have been trained. This, without a stretch of the imagination, is unprecedented and marks a watershed in the training administration in Lagos State.

According to Ponnle, LMS is a game-changer. It has made it possible to practically phase out low training quota in the State’s civil service which used to be 3,000 staff in four years prior to the Sanwo-Olu’s administration. With its emergence, the State Government can successfully train an average of 50,000 staff in a year.

The Governor, Babajide Sanwo-Olu said that “the Learning Management System was a crystallization of the reform process, which his administration initiated to improve service delivery in public administration and governance. It is commendable that the public service personnel have embraced the innovation, which will further enhance their capacity to deliver quality and timely service to citizens of our State.

He said the innovation has raised the bar of service delivery among the civil servants, stressing that the platform would expose the personnel to a wide spectrum of opportunities for enhanced competence and efficiency.

On her part, Ponnle, said the implementation of the Learning Management System was not about having a global trend but a radical change that was at the root of repairing public service failures in the State.  For us, it is really a game changer and I think the beauty of the process is also that we are able to mandate public servants to do certain courses.

At the heels of the LMS is the Webinar series which is a child of circumstances made possible by the global lockdown.  The state government took advantage of the difficult times of the lockdown to introduce webinar series as a learning avenue for workers. Ponnle said that the government used COVID-19 lockdown as an opportunity to fast track online training strategy with its webinar series, tagged ‘the Resilience series’. Within the short period of the initiative, 11 different series had been held with 10 generic and one job-specific programme for teachers.

In the same breadth, a monthly online capacity development programme for Lagos State civil servants called ‘EXCO Shares’ was introduced. In this Webinar, a member of the Lagos State Executive Council takes the entire body of the civil service on a topic for the purpose of knowledge-sharing and enlightenment and this is also accessible on the LMS platform.

In the midst of all these innovations, the government was still able to come up with the idea of an Executive Coaching Programme for the State Executive Council Members. The initiative was in partnership with International accredited coaches, whereby cabinet members are offered one-on-one coaching by accredited experts in sessions to support in developing their personal, professional and political aspirations. The objective of the programme is to align the purpose of leaders with those of their MDAs in order to transform the State’s public service and the State in general.

In the same disposition, the State Government sponsored a staff from the Lagos State University Teaching Hospital (LASUTH), Dr. Victor Adekunle, overseas to study for Masters in Legal Medicine and Forensic Dentistry in order to bridge an identified gap in the public service. By this gesture, the state public service gained global attention and Dr. Victor Adekunle achieved a historic feat of becoming the first forensic Dentist in West Africa as a result of government investment in human capital development.

As an attestation to the fact that training programmes transcend the entire spectrum and hierarchy of the State Service, leadership training programmes were also organized for Managing Directors, Directors-General, General Managers and Executive Secretaries. The executive programme, which lasted for 10 days, was meant to, amongst other things, provide pragmatic approach and exposure to the concept of leadership, strategic communication and winning with influence and persuasion.

In spite of the paradigm shift in training modalities, the State Government still conducts physical training for staff. The Office of Establishments and Training as well as the Public Service Staff Development Centre conducted a series of physical (face-to-face) training which relate to mandatory learning development programme as well as structured training for promotion. It is interesting to note that a substantial number of civil servants were involved in this training.

In light of the transformation agenda, the State Government also initiated a programme with the acronym, SHIFT (Simple, High Impact, Interactive, Focus and Transformational). It is a knowledge initiative with the aim of creating a 21st-century workforce that focuses on new thinking, new behaviour and new approaches to doing business in service.  A product of this initiative was the identification and granting of a special promotion to two Officers in the State Civil Service. One of them developed a unique application (Alausa Sabi) for accessing the compendium of Civil Service Rules whilst the other wrote a book titled, ‘10 Harks for Working in Naija’.

The State Government is at the threshold of entrenching a new order in the training climate in Lagos State. These medley of training programmes are a result of deep commitment and conviction to change the training narrative and achieve the third pillar of the THEMES agenda. In spite of the achievements made so far regarding the training of staff, the government is not resting on its oars as it plans to churn out more useful practical training programmes in the coming months.

‘Dele Balogun is the Director, Public Affairs for Ministry of Establishments, Training and Pensions in Lagos.