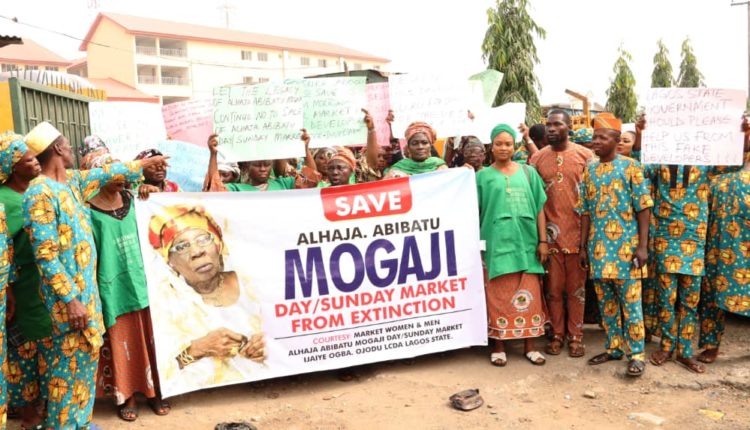 Hundreds of traders from Abibat Mogaji Sunday Market, Ogba in Ikeja on Tuesday stormed the office of Lagos State Governor, Babajide Sanwo-Olu, protesting against planned demolition of the market.

The traders, who defied the scorching sun to express their displeasure over plans by Ojodu Local Council Development Area (LCDA), Olumiyiwa Oloro, at Alausa Secretariat, Ikeja, stressed that the chairman allegedly aimed to demolish the existing market and use available space as car park.

According to the aggrieved traders, the council chairman allegedly planned to sell the demolish market space to a private mortgage developer who intend to turn the market to a car park for his newly developed market.

Speaking on behalf of the protesters, Iyaloja General for Ojodu LCDA, Folashade Salako, appealed to the Governor and the Speaker, Lagos State House of Assembly, Mudasiru Obasa, to prevail on Oloro to shelve the plans, saying, the action will affect the state economy.

Salako, who is also the Iyaloja of Abibat Mogaji Sunday Market, Ogba, said the market which has been in existence for more than 35 years, has been the workplace for both the rich and poor that come from different locations including Mainland, Ibeju Lekki, Agege, Epe, Ikorodu, Ifo and Abeokuta in Ogun State, and Igbo-ora in Oyo State.

She lamented that traders were informed last week by Oloro when he visited the market after allegedly completing negotiation with the approved developer and informed that the traders, who have an investment there must be ready 30years mortgage plan.

The market leader urged the government to save the traders that they have no means of survival and this is the only way they feed the members of their family.

In a copy of their petition presented to the members of the State Assembly read; “The Abibatu Mogaji Sunday Market should not be allowed to be taken over by Hon. Oloro to turn into a car park as this would be tantamount to eroding the efforts of Late Alhaja Abibatu Mogaji.”

Salako said as a peace-loving people and a prominent member of APC, in the state, they have opted to come peacefully to the House to show their dissatisfaction.”

After receiving the traders’ petition, the Speaker argued that citizens have rights to engage in legitimate trading in Lagos State and there right must be trampled upon.

Obasa, who was represented by a lawmaker, Tunde Buraimoh, said marketers were part of those who enthroned this democracy, and this government belongs to them.

While commending the traders for staging a formal and peaceful protest, the Speaker assured the protesters that their issue would be deliberated upon during their session.

Obasa urged them to be patient in dealing with the affairs of the market. He also promised to relay the traders’ passion and actions to the speaker.