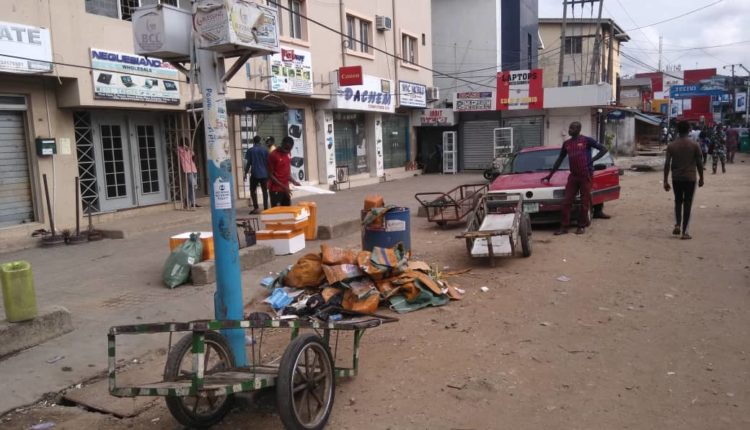 Hopes of customers aiming to transact business in Ikeja computer village were on Monday dashed after members of the Community Development Association (CDA) shut the market in protest against alleged assaults of members and high-handedness on the part of the Iyaloja and Babaloja.

The CDA, who were joined by traders to protest the act, alleged that since the imposition of the Iyaloja, Abimbola Azeez, and Babaloja, Adeniyi Olasoji, by the Iyaloja General, Folashade Tinubu-Ojo, there had been a complete disregard for existing associations, the introduction of new levies and persistent changes in rules and regulations.

According to the CDAs and traders, the shutdown of activities for the next 24 hours was meant to send signals to all stakeholders that henceforth they would not accept further assaults and payment of illegal fees

As gathered, the lingering face-off between the traders, CDA, Iyaloja, and Babaloja was said to have attracted the Lagos State House of Assembly attention but the lawmakers’ intervention could have yielded results when the Federal Government imposed a lockdown on Lagos to curtail any further spread of coronavirus.

To prevent any breakdown of law and order in the market, It was learned that the House instructed parties to allow the status quo to remain pending when the spread of coronavirus would subside in the state.

The traders were said to have completely yielded to the lawmakers’ directives but the Iyaloja and Babaloja, sources said, never observed it and further instructed traders to pay up their monthly dues, which was one of the major reason for the face-off.

In a circular obtained by The Guild which was dated May 11th and signed by the Iyaloja and Babaloja, the traders were instructed to pay into a Sterling Bank account with the name, Computer Village Market Board.

Aside from the monthly dues, the Vice-Chairman, Ogunbiyi Community CDA, Timi Davies, in an interview with our correspondent, disclosed that the Babaloja and Iyaloja were constantly violating human rights within the market.

Davies narrated that they had tolerated assaults from the market leaders and that last Saturday, the residents and traders decided it was time to inform the public what was happening within the market.

“Last Saturday, traders, and residents of Idowu lane erected a gate to prevent persistent looting of shops and after completing the exercise, Iyaloja and his thugs stormed the premises, removed the gate, and took it away. After this, she also facilitated the arrest of the CDA chairman and some others. It took the intervention of the Area Police Commander before the chairman and others were released. And this is when we then decided that we cannot take this anymore”.

The vice-chairman added that the Iyaloja grouse with the CDA chairman and others was that they did not seek her permission before erecting the gate.

According to him, we believe that this will send a signal to all that we are not going to sit down and accept anything that is thrown at us.