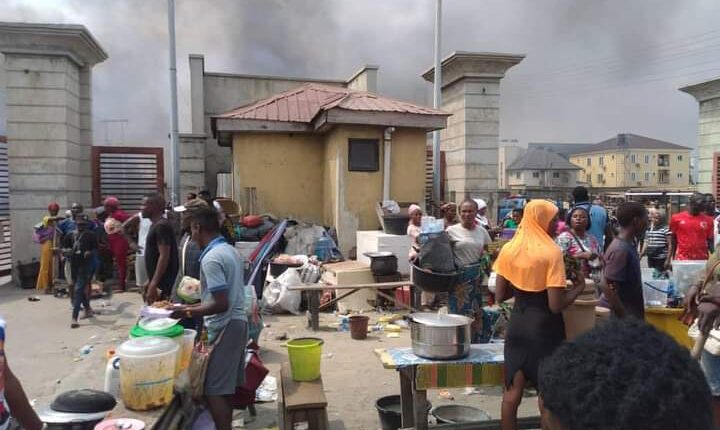 Dozens of homeowners, traders, and artisans around Maroko and along Lekki Coastal road in Lagos State were currently stranded without any meaningful direction after watching bulldozers deployed by the Lagos State Environmental and Special Offences Unit (Taskforce) pulled down hundreds of structures considered by the government to be distorting the actual master plan for the area.

The victims, who gazed at the entire community in disbelief, watched as some of the items that could be salvaged and used to set up a makeshift structure were already set ablaze by the Taskforce that also requested the assistant of Lagos State Fire Service officials to ensure that the fire does not spread to other communities not included in the demolition exercise.

As gathered, the demolition exercise came barely 24 hours after the three-day quit notice issued by the government to owners of makeshift structures, shanties, kiosks, and owners of vehicles within the axis that were discovered to be contravening the laws including sanitation and physical planning in Lagos, ended.

Standing few meters away from where his structure once stood before the bulldozers deployed by the state enforcement team roared on Friday, a trader, Matthew Oji, stated that though he received the notice issued earlier in the week but was yet to conclude on the new location for his business. 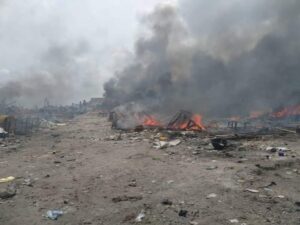 Oji lamented that the enforcement team did not allow the victims to remove what they could use in their new location, saying you can see that they have set some of our property ablaze.

While expressing fears on how to source funds to feed his family pending when another location would be sorted, the trader appealed that the government should assist him and others get a permanent location for their businesses.

Another victim of the demolition, Ronke Adewale, an artisan, said that the demolition had further put pressure on her and others affected by the enforcement exercise, noting that their appeal during an engagement with the Taskforce was that they increase the day but that the team refused to yield.

Adewale noted that the claim of the enforcement team earlier in the week was that the structures erected particularly along the Lekki Coastal road were affecting the progress been made by the government and investors on the Lekki Free Trade Zone.

She added that they (taskforce) argued that the road was re-designed to serve as an alternative route to the Zone where the Dangote facilities sited were sited.

According to her, we did not reach an agreement on that day and the reason we did not take it seriously was that since it is government the action will not be swift but today, all we saw was bulldozers removing our structures.

Speaking on the enforcement, the Chairman of Taskforce, Shola Jejeloye, said that quit notices were issued on different occasion and that the traders ignored it, saying they took over the entire road, I mean turning an alternative route for motorists going to the Free Trade zone axis into a market arena. 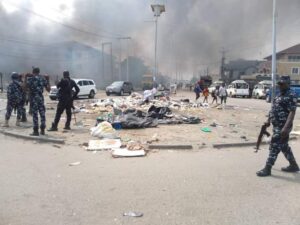 Aside from selling on the road including illicit drugs, the chairman in an interview with newsmen, added that the occupants of the structures often engage in all forms of criminalities at night, dispossessing residents of their personal belongings.

He said: “These activities have persisted for long and the Governor, Babajide Sanwo-Olu, instructed that actions be taken immediately to prevent it. And that is what we have done here today.

“Previously they were dislodged but after they discovered that the government was yet to use the land, these people returned and erected structures again on it. But I want to assure you that such will not occur again because we will wait until the government was ready to convert it to public use”.

According to him, the stretch of road has been taken over by mechanics, block makers, bamboo and wood sellers, shanties, and other illegal occupiers, which are going to hamper road construction work in the area.

He stated that on the expiration of the Removal Notice on Thursday, officials of the agency would remove all structures, shanties, abandoned vehicles, and materials in the area.

The chairman noted that the removal of shanties and criminal hideouts in Marwa Waterside area would help reduce traffic robberies and criminal activities on Lekki/Ajah Corridor, particularly in Jakande Roundabout.

It would be recalled that Lagos State Government in December 2019 removed all the illegal structures on the Lekki Coastal Road to pave way for its construction.