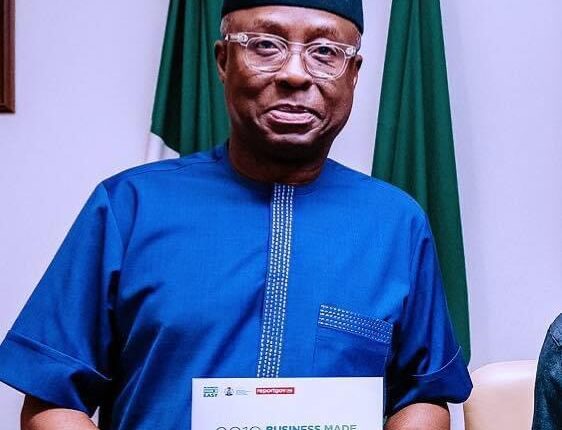 The Minister of Trade and Investment, Niyi Adebayo, has refuted claims and media reports that he was concluding plans to contest the Ekiti State governorship position in 2022 and succeed Governor Kayode Fayemi.

He explained that the viral nature of the claims and response it had generated from Nigerians, particularly Ekiti residents owing to his personality had necessitated the clarification, adding that such claims were figment of the peddlers’ imagination.

Adebayo, who is also a former governor of the state, said that it was surprising people could be making such claims 17 years after he left the government house, stressing that he was not eyeing the position as being claimed by rumour mongers.

Debunking the claims while briefing newsmen, the Minister maintained that he never authorized the billboard mounted in Ado Ekiti purportedly announcing his intention to contest the governor’s seat.

Adebayo urged Nigerians, particularly, Ekiti residents to disregard the claims and go about their daily activities devoid of distraction from his political enemies, saying that he was committed to working in achieving President Muhammadu Buhari’s Next Level agenda.

“I have heard about it just like you. I did not authorize it and neither do I know those who installed it.

“My colleagues, I mean those who served with me when I was governor are looking to be President now. Fayemi who came many years after me and my political son want to be President. Why should it be now that I will want to be governor again,” he said.

The Minister’s rumoured bid to succeed Fayemi has been rife in the past six months but reached its zenith over the weekend when a billboard and several posters appeared on the street of Ado Ekiti, the state capital of his purported intention to contest in 2022.

Otunba Adebayo was a single term governor between 1999 and 2003. He was defeated by Ayo Fayose in the general election of 2003. He was the Deputy National Chairman South of APC before his eventual appoint as Minister by President Buhari.