36 suspects under arrest after daylight robbery in Lagos 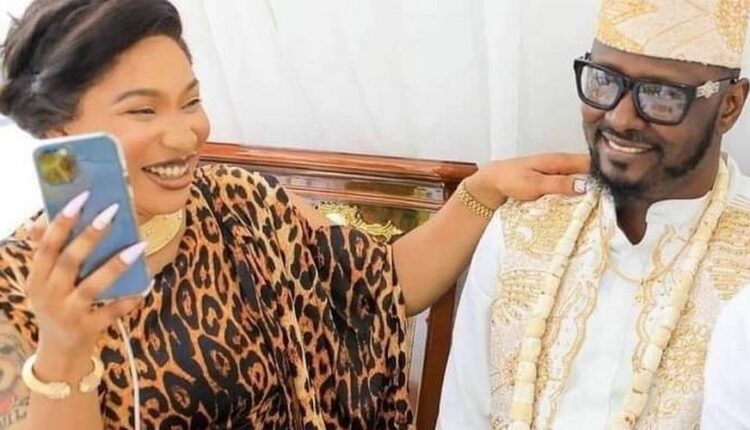 The Nollywood multiple awards winning actress, Tonto Dikeh, has said that the leaked audio recording involving her and the former fiance, prince kpokpogri, was an old conversation and was not after their relationship crashed.

Dikeh said that the person that leaked the viral audio was not interested in the resolution of the issue between her and the former fiance, rather made it public to blackmail her and obtain money.

She cleared the air on Tuesday through a statement posted on her official social media handle to state what truly transpired between her and the former lover, barely three months after the actress introduced him to Nigerians and her fans.

The actress assured everyone that those behind the leaked audio would be dragged before the court as stipulated by the country’s constitution.

She noted that the actions of those that leaked the audio were not affecting her since she knew that the constitution would not favour one ahead of the other in the country.

“My dearest fans, the illegally recorded and leaked voice recording of a private conversation by prince kpokpogri making (the) rounds was in the past and has absolutely nothing to do with the recent

“I appreciate your sincere concern, I am doing perfectly ok and in one piece, be rest assured that every Blackmailer will be brought to justice.

“It is the law and I am at peace knowing the law Will take it’s course..Like I always say, the only valid conversation is congratulations because Jesus saved me”, the actress added.

Meanwhile, in the less than nine-minute leaked audio, the actress was said to have been heard and that of Kpokpogri who was heard saying he could no longer put up with the actress in the relationship.

“Why do you think walking away will not give more peace? No, you can’t give me peace. See let me tell you ehn, from day one, it was not even up to two weeks when we started having crises,” he said.

“Can’t you see it yourself, a relationship that is not up to three months, yet you see the crisis…It’s like you don’t know me, I am a very peaceful person, anything that will threaten my peace, I will just run away…

“I told you that right from day one that babe please oh, I’m a very peaceful person. Even as it is my now, my aunty will say we don’t have anybody here in Abuja. I’m the only family they have in Abuja.

“I cannot even bring my cousin to come and stay with me, because the next thing is they will come and tell you she is my girlfriend and the next thing, everywhere will be on fire.

“Please, I just want that peace so everyone around me can be happy. Where is Captain Nosa today with all the money? I don’t want to die young, anything that will break or destroy my peace, I don’t want it”.

Cybercrime: How Nigerians can detect online scammers and vulnerability