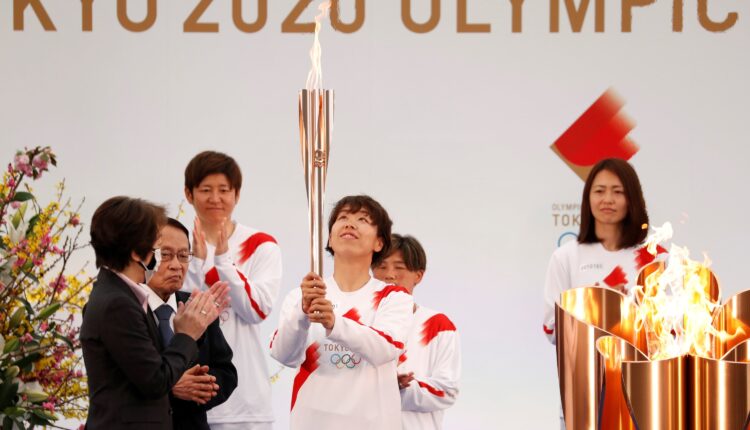 The official countdown to postponed Tokyo 2020 Games has begun as the first group of runners carried the Olympic torch through Fukushima, in the first test of measures that organisers insist would ensure a “safe and secure” event in the midst of the coronavirus pandemic.

After a brief opening ceremony (which was closed to the public) on a football pitch inside the J-Village training complex, members of the Japan women’s football team began the torch’s 120-day journey through 859 locations, culminating in the opening ceremony at the Olympic stadium on 23 July.

The Head of the Games’ Organising Committee, Seiko Hashimoto, said that the start of the Olympic flame’s journey was a sign of hope.

“For the past year, as the entire world went through a difficult period, the Olympic flame was kept alive quietly but powerfully,” she said at the opening ceremony, which was attended by a small number of dignitaries.

“The small flame did not lose hope, and just like the cherry blossom buds that are ready to bloom, it was waiting for this day.”

The relay bore little resemblance to those that have preceded every summer Olympics since it was first held at the Berlin Games in 1936.

The torchbearers, beginning with Azusa Iwashimizu, part of the Japanese team that won the women’s world cup in 2011, ran through sparsely-populated streets in Naraha – one of several communities that were evacuated after the meltdown at the nearby Fukushima Daiichi nuclear power plant.

Large crowds have been discouraged, and the few spectators who did turn out were asked to wear masks, socially distance, and refrain from cheering or shouting.

The runners, who will each carry the cherry blossom-motif torch over a distance of about 200 metres, must keep records of their health condition and have been asked not to dine out with other people.

The low-key arrangements would remain in place over the next four months, when about 10,000 runners would take the torch across Japan’s 47 prefectures.

Fukushima had been chosen as the starting point to underline the Games’ role in highlighting the north-east coast’s slow recovery from the March 2011 earthquake and tsunami – which killed more than 18,000 people – and the resulting nuclear disaster.

Hashimoto said she hoped the relay would inspire people in Fukushima who are “still struggling to get their lives back to normal”.