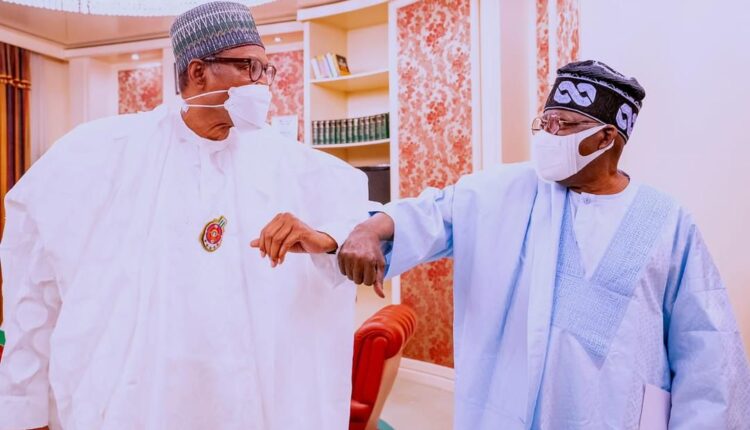 The National Leader of All Progressives Congress (APC) and Lagos State former governor, Bola Tinubu, has indicated that to serve as Nigerian president is an ambition that he has been nursing for a longtime, saying that he has the capacity to rule the country in the best interest of Nigerians.

Tinubu also said that he has informed President Muhammadu Buhari of his ambition to succeed the president after expiration of his tenure next year.

The former two-time governor of Lagos explained that contrary to speculations that he would remain ‘kingmakers’, his lifelong ambition was to become Nigeria’s president and work assiduously with his team to put the country on path of genuine progress and development.

The APC chieftain disclosed these on Monday while briefing State House Correspondents after meeting the president in his office at the presidential villa, Abuja, adding that like every eligible Nigerians, he would be contesting for the oval office in 2023.

“I’ve informed the President of my intention but I have not informed Nigerians yet. I’m still consulting. And I have no problem consulting. And I’ve noticed that a parameter of limitation to the extent of how many people will I consult.

“You will soon hear. All you want to hear is the categorical declaration. You’ve gotten that truth from me that I have informed Mr. President of my ambition,” Tinubu said.

The former Lagos governor, however, refused to be drawn into the question of a potential race for the APC ticket between him and Vice President Yemi Osinbajo whose support groups have been mobilizing for his candidacy.

Asked why he would not remain a kingmaker rather than being the king, he said that there is nothing that stops a kingmaker from becoming the king unless he has committed murder.

“I have never seen the cap of a kingmaker before. That is the truth and I have never seen where it is written in the rule book anywhere in any country that a kingmaker cannot be a king – unless you commit murder. So, whatever is your attribute [of me] is your own opinion. Me, I want to pursue my ambition without the title of a kingmaker. You can write your literature and story based on your own perception.”

It would be recalled that in a bid to douse the tension that had continued to trail the 2023 presidential poll particularly as its concerns Tinubu’s ambition, the Minister of Works and Housing, Babatunde Fashola, had last year November asked Nigerians to wait till January 2022 when the APC national leader would make his stance known publicly on the election.

Fashola had then said that the speech expected to be delivered by Tinubu this would determine whether he was ready to become President Muhammadu Buhari’s successor or not. He noted that there was no need for the tension that had enveloped the country over the APC national leader’s presidential ambition, saying let us wait till next year, 2022.

The minister gave hints on the date for declaration and cleared air on other issues concerning the ministries under his purview during an interview on a popular television programme aired on November 19. Fashola, while responding to question on whether he would support the candidacy of Tinubu for the 2023 election, said that Tinubu was yet to informed him of his presidential.

“I saw him last week; he didn’t tell me he is running for office and to the best of my knowledge, the last statement he made about it was that people would know in January,” he added.