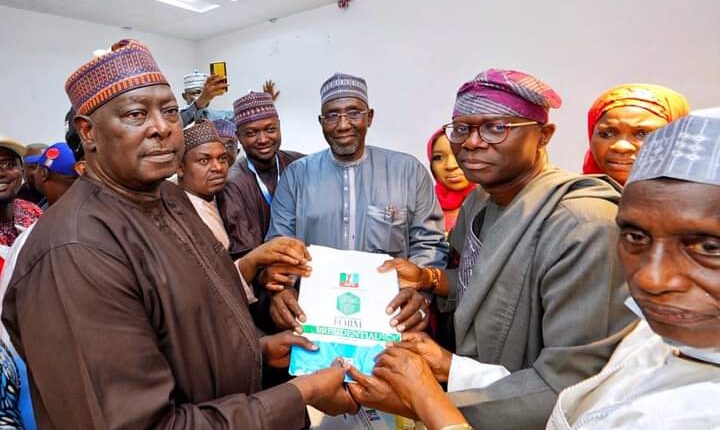 What started as mere speculations that the national leader of All Progressives Congress (APC), Bola Tinubu, would be contesting 2023 presidential election and possibly succeeding President Muhammadu Buhari, is beginning to become a reality after submitting his nomination and expression of interest forms before the party.

Tinubu’s submission of the forms sold by the party at N100 million became the first aspirant among the over 20 members of the party that has indicated interest to become APC presidential candidates ahead of next year’s poll scheduled to hold before May 29th, 2023.

Aside that Tinubu was the first to submit his forms, and he has also secured over 370 signatures of national delegates on his forms, indicating that at least 10 delegates that were scheduled to attend the Presidential special congress from the 36 states and the Federal Capital Territory (FCT) Abuja, approved his candidature.

This hurdle was one of the conditions given by the party as a requirement for all aspirants is to secure 370 delegates across the country for any form to be valid.

The forms were submitted on his behalf by a former Secretary to the Government of Federation, Babachir Lawal, former Speaker House Of Representative, Yakubu Dogara, as well as a member of the green chamber, James Faleke, along with his supporters.

Also present at the submission exercise was the Lagos State Governor, Babajide Sanwo-Olu, who was also at the party’s submission venue, to hand over his forms as well as see to the submission of his predecessor’s form at APC’s secretariat in Abuja.

Hours before the submission, Tinubu had during his visit to Gombe state lamented the current challenges confronting the country and promised to address them if elected during 2023 elections.

The All Progressives Congress chieftain said he would tackle insecurity head-on, stressing that his government would develop contemporary measures in ridding the country of criminality.

He revealed that they have the power to consolidate his quest for the number one position in Nigeria, adding that he has the capacity to reposition the country.

Tinubu said, “Today is the day I have come to ask for your support to be president of Nigeria. You can put me there with your voters.

“I believe in myself, I’m confident, capable, intelligent, courageous, brave, determined, and the government is not a joke. In the coming delegate election. Choose wisely, choose me, I beg you.”

“We have an opportunity to change Nigeria, I guarantee we will change Nigeria. The change in Lagos is just beginning, the change that made Lagos the richest state in Africa now. We will collaborate with all the states of the federation,” he added.