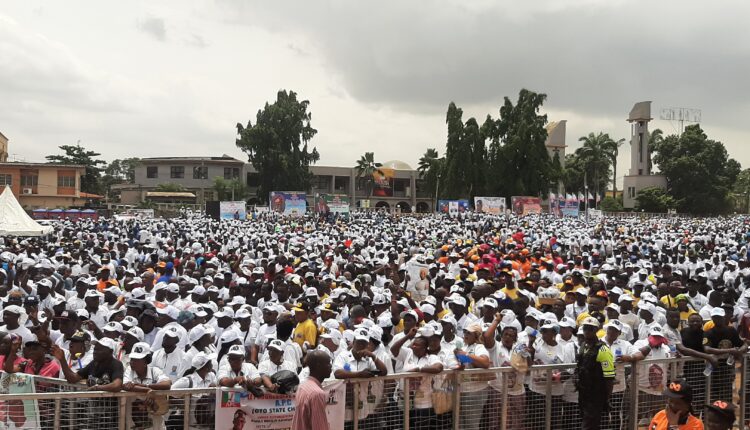 Ahead of the 2023 presidential election, Dozens of Nollywood actors and actresses as well as musicians have unanimously declared that they were already prepared and ready to go all out to mobilise Nigerians for the national leader of All Progressives Congress (APC) and a frontline aspirant, Bola Tinubu, when he becomes the party’s candidate.

They argued that what was left for them to commence the exercise is the party’s presidential primary, which they believed he will win, and after that, it would commence immediately untill after the election next year across the country.

They claimed that the APC national leader had paid his dues over the years and that 2023 remain the best time they could return all that he had done positively for them in the entertainment industry to ensure it remains the best in Africa.

These plans were disclosed when they joined over 100,000 people from Lagos and across Southwest region at a rally organised by the Team Lagos Nigeria movement for Tinubu’s presidential ambition.

At the rally on Monday in Ikeja, the Lagos capital, they also threw their support for the re-election of the State Governor Babajide Sanwo-Olu, stressing that he had performed and the best for Lagos was that he returns to complete all ongoing projects across the state.

Addressing the crowd that gathered at the venue, Taiwo Hassan popularly called Ogogo, said that all that are ready to campaign for him and that all they needed from the crowd and other Nigerians that loved him was to get their Permanent Voter Card (PVC) for the election.

Also,. an Islamic musician, Ahmed Alawiye popularly called Alalubarica, said that they have come to the venue to show solidarity and that they will not relent to continuously tell Nigerians that Tinubu remain the best candidate to succeed President Muhammadu Buhari next year.

Alawiye noted that he and other musicians came to the venue to declare their support for Tinubu’s presidential ambition and that they are ready to give him all necessary support that could bring the victory in 2023.

Akinsanya, urged those without PVC to go and get theirs, as there would be no access for anyone with the card to perform his civic duties during the election.

“This coming election is about numbers and we want to turn out over four million votes for Asiwaju Tinubu in Lagos. It is doable if we all go get our PVC. Lagos has over 20 million population with youths constituting the majority. Let us use our votes to entrench good governance by voting en-mass for Jagaba (Tinubu),” he added.

Conference 57 Chairman, Kolade Alabi, said he was not surprised with the crowd mobilised by the group going by their antecedents and that the actions of the group members further showed that Tinubu is more than prepared to succeed President Muhammadu Buhari.

According to him, Nigerians will rejoice and more progress would be recorded if Tinubu becomes the elected President of the country.

“President Buhari has done a lot. He needs an enigma with strong political will to consolidate his achievements. This is why we are all clamouring for our leader Asiwaju Tinubu to succeed him,” he added

Alabi urged Lagosians to vote massively for Sanwo-Olu during next year’s poll and ensure that he gets votes that would be higher than what he got during his first term election.

Also, Lagos APC Women Leaderz Jumoke Okoya-Thomas, applauded Team Lagos Nigeria for the good job and implored women to support Tinubu’s aspiration, so as to get the more slots in governance.

“Asiwaju has put women as leaders in politics. Endeavour to get your Permanent Voter’s Card (PVC) and encourage other women to do the same. This is time to do the work,” he said.

Explaining the aim of the group, Director-General of Team Lagos Nigeria in Southwest, Anthony Adeboye, said the group was a formidable grassroot political group out together to support Tinubu for his contribution to development of the country.

Adeboye disclosed that through Team Lagos Nigeria, Tinubu has empowered thousands of helpless Nigerians and that this would continue when he becomes President of the country.

“Team Lagos Nigeria has been in existence since 1999 to promote good governance and working harmoniously with all political leaders and office holders to bridge the gaps between the grass root and the people in government,” he said.

According to him, the team has worked harmoniously with four different governors – Tinubu, Babatunde Fashola, Akinwunmi Ambode and Governor Babajide Sanwo-Olu, who was described Sanwo-Olu a strong pillar and life patron of the group.

The Lagos State Governor, Babajide Sanwo-Olu, while responding on behalf of himself and Tinubu, said that the gesture would continue to boost his morale towards ensuring that all that pro-masses policies were often introduced across the state.

Sanwo-Olu, who was represented by Commissioner for Home Affairs, Prince Anofiu Elegushi, said that Tinubu has done so much for Nigerians and it is a payback time for him, saying this is the best time that we can all pay him back for that.

Meanwhile, the governor urged everyone to keep the tempo high to ensure victory for Tinubu and himself during next year’s election in the country.