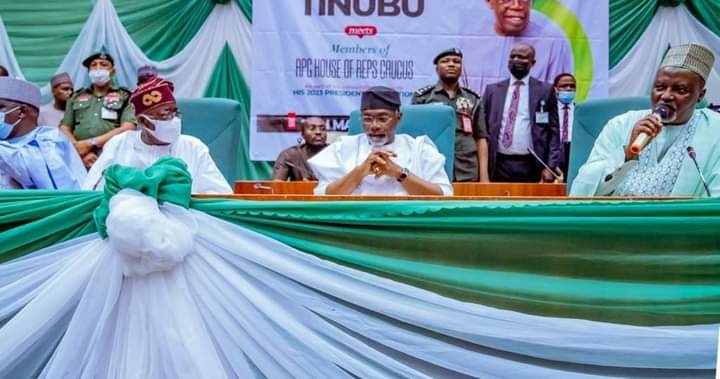 The All Progressive Congress (APC) National Leader, Bola Tinubu, has tabled his 2023 presidential ambition before senators and representative members of red and green chambers of ninth National Assembly for needed joint support, such that would not only assist him in becoming Nigerian next president but make each one of them part of political officers that would rewrite the nation’s history.

Tinubu, who engaged the lawmakers separately, said that he was simply there with all humility, but with the requisite qualifications, to seek their support to take over from President Muhammadu Buhari in 2023.

The Lagos State former governor had met with senate president, Ahmed Lawan, and Speaker of House of Representatives, Femi Gbajabiamila, on Wednesday, to seek their support on persuading fellow members to support his ambition.

“I am here to seek your support for my life-long ambition. To step into the shoes of President Buhari in 2023, and not to step on his shoes”, he told a jubilant caucus.

After listening to him, the lawmakers assured him that they would support him towards becoming APC presidential candidate for 2023 election.

The lawmakers said that Tinubu had over the years supported many politicians towards achieving their aims and that the time has come for everyone to also rally behind him, to ensure he actualise his dream.

Assuring Tinubu of their support, Senate President, Ahmed Lawan, stated that the APC Senate caucus remains a major pillar of the party and has shown loyalty as well as commitment towards the ideals of APC.

Lawan told Tinubu that in the course of fighting for the unity of the party, the lawmakers are with him and would ensure that the party remains united for him.

Speaking earlier to welcome Tinubu to the meeting with Representatives from APC, Speaker of the House, Femi Gbajabiamila, told his colleagues that nobody else had shown genuine interest or campaigned to be President next year apart from Tinubu, adding no one else is contesting but one man, Bola Ahmed Tinubu.

Gbajabiamila, meanwhile, described Tinubu’s visit as “epic” and “historic”, being the first presidential aspirant to visit the House to seek the support of members.

Also, the House Deputy Speaker, Ahmed Idris Wase, who also spoke, drummed home the message that for a man who had assisted many people to climb the political ladder, there was no better time than now to reciprocate the gesture.

The House Leader, Alhassan Ado-Doguwa, who moderated the endorsement and spoke on behalf of the members, got not a single “nay” voice when he called for the votes of those against Tinubu’s ambition.

“Bola Ahmed Tinubu has everything it takes to be the President of the Federal Republic of Nigeria, comes 2023”, he stated, as he rounded off his address to the visiting APC national leader.

It would be recalled that Tinubu, had last week, informed the APC caucus in a letter written to Lawan and Gbajabiamila, which they read out on the floor at the plenary on March 8, 2022.