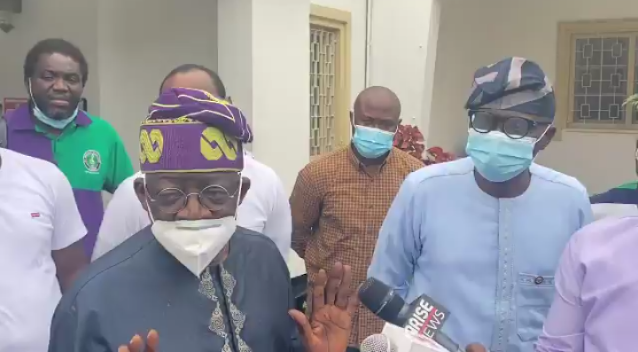 The National leader of the All Progressive Congress (APC), Bola Tinubu, has sympathized with youths protesting against police brutality in Nigeria that were attacked by military officers at Lekki tollgate, just as he denied traveling abroad after the alleged shooting of EndSARS protesters at the demonstration ground in Lagos.

Tinubu, who wished the victims speedy recovery from injuries sustained, noted that the singular action of the military officials further led to vandalism, invasion, and wanton looting of public and private assets in the state, resulting in a massive infrastructure deficit for Lagos.

The APC national leader stated these on Saturday after a courtesy visit to the Lagos State Governor, Babajide Sanwo-Olu, at the State House in Marina, Lagos.

While fielding questions from newsmen after the meeting, Tinubu, who was a former governor of Lagos, said that his visit was to console Sanwo-Olu on the unfortunate incidents that were recorded in the State recently.

He further hinted that the visit also afforded him an opportunity to discuss with the governor and ascertain if he directed the military actions at the Lekki tollgate on the peaceful protesters in the state.

Tinubu had been attacked recently over the Lekki incident as rampaging hoodlums burnt down investments reportedly linked with him including a television station, a newspaper house as well as assets of the Lekki Concession Company, the managers of the toll gate.

The APC chieftain also debunked the rumors making the rounds that he flew out of the country to France during the crisis and that his son, Seyi, was kidnapped during his visit to London, United Kingdom.

While blaming circulation of fake news for many disasters in the state, he noted that as the Asiwaju of Lagos, he has nowhere to seek solace but to stand firm with his people during any crisis.

He said: “I didn’t go nowhere; I am a Lagosian. And I still hold the title of Asiwaju of Lagos State and I am still a Jagaban. Whatever they think; fake news is all over the place. They said my son, Seyi was kidnapped. He is here (Tinubu pointed at his son). It is all a joke.

“We have to separate those who suffered brutality in the hands of some SARS officers before the protests from those who suffered casualties due to shootings at the Toll Gate. For those who suffered from SARS they should approach the Judicial Panel of Inquiry and present their case to the panel. The panel is independent and I trust the caliber and character of the people there.

Making reference to Sanwo-Olu’s handling of the protest before the curfew was imposed, Tinubu said the governor did what he should have done under the circumstance, even as he added that Sanwo-Olu, who is youth-friendly, listened to the protesters, and took their demands to the president in Abuja.

According to him, he (Sanwo-Olu) quickly went to Abuja with the five for five and the government immediately went into action. We saw on television that he delivered the message to Mr. President. The President did not say no. The President gave him an appointment within a few hours. That is responsive enough for people to go to town but where are we getting the lootings, the carnage, the burning and invasion of our Police stations, and stealing of arms and maiming the innocents. It is handshake beyond the elbow.”