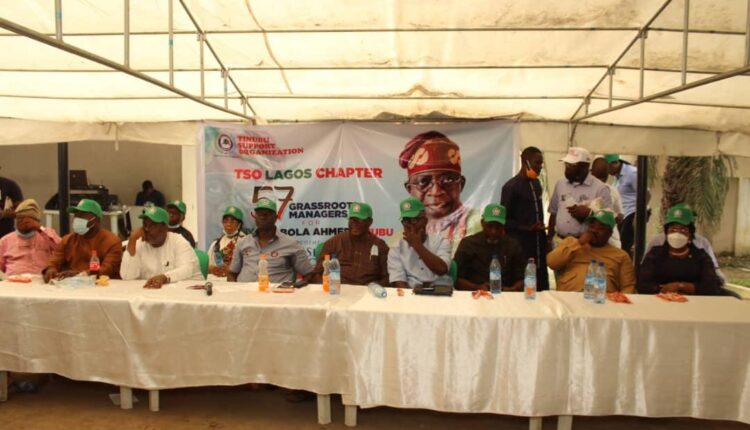 As part of moves aimed at spurring interest of All Progressives Congress (APC) National Leader, Bola Tinubu, to contest for president during 2023 general elections, a group, the Tinubu Support Organization (TSO) has appointed and inaugurated principal officers across the 57 Local Government Areas in Lagos State to lead mobilization for support and endorsement of the APC chieftain.

As stated, the principal officers, including Chairmen and Secretaries across the 57 local government are to ensure adequate support base from the grassroots buy into the candidacy of the former Lagos State Governor, a move they said, would further bolstered Tinubu’s confidence to throw his hat into the ring come 2023.

The TSO Lagos State Coordinator, Akinduro Ibesanmi, said that the appointment and inauguration of principal officers across Lagos was part of efforts aimed at actualizing a beautiful and befitting structure for the group as well as serving as vehicle to trumpet the group’s vision and mission such that would attract buy-in of entire Lagosians irrespective of religious, ethnic or political affiliations.

He added that with the enormity of task at hand, it had become imperative for the group to have presence and representatives across the local governments, adding that for the success of their mission, there was need for Tinubu to be accepted at the grassroots level who formed the major voting bloc.

While charging the newly inaugurated officials to brace up for the task ahead, Ilesanmi described the work before them as unprecedented in the history of Tinubu’s supporters’ political life, stressing that his mandate for 2023 was not negotiable.

According to him, all hands must be on deck to bring the vision to fruition and this is one of the reasons for bringing on board the TSO-ship because of the enormity of the task.

“The desire is to have our leader Asiwaju Bola Ahmed Tinubu declare the intention to run for the 2023 presidential election. The grass roots managers is to keep mobilizing people at the local, ward and unit levels across of the state. Your appointment is not a happenstance but deliberately done because of your political pedigree and contributions in the past” Ibesanmi said.