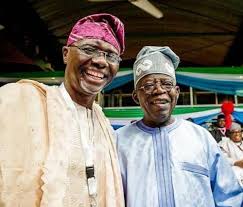 The National Leader of the All Progressives Congress (APC)  Bola Tinubu, in conjunction with the Lagos State Governor, Babajide Sanwo-Olu, has expressed optimism that the reputation of the newly appointed Chief of Staff to the President, Prof. Ibrahim Gambari, will advance the nation’s bilateral relations with foreign countries and Nigeria’s standing amongst committees of nations.

Tinubu said that the new Chief of Staff’s reputation, outstanding records, and impressive pedigree would come to bear in seeking international efforts and resources to aid the nation’s fight against the deadly coronavirus pandemic.

The party leader, who is also a former Governor of Lagos State, while commending President Muhammadu Buhari on his choice of Gambari explained that said the CoS rich experience, skills in administration and diplomacy will serve as a game-changer and contribute to the administration’s successes.

The APC national leader, through a statement, released on his social media page on Wednesday, said the Gambari will work competently and with a dedication to helping President Buhari advance his policy and governance priorities for the betterment of Nigeria and Nigerians.

“He is no stranger to our party, APC, and its progressive national vision. Over a long and illustrious career, Prof. Gambari has proved his mettle nationally and internationally. His resume takes a back seat to none.

“He has made groundbreaking contributions in the areas of conflict prevention and resolution, democratisation and development in Africa. At this time when the entire world is combating the coronavirus pandemic and the economic consequences thereof, Prof. Gambari’s expertise and international reputation will help Nigeria galvanize national, regional, and international efforts and resources to contain this viral menace and to advance Nigeria’s interests on other important matters.

“Chief of Staff Gambari has my best wishes and encouragement. His is a tough assignment, perhaps the hardest he has had, but he is a special person with great attributes. He will meet the challenge by discharging his duties with excellence and high purpose,” the statement said.

On his part, the Lagos State Governor, Babajide Sanwo-Olu, lauded the President, Muhammadu Buhari, on his choice of the newly appointed Chief of Staff, Prof. Ibrahim Gambari, saying that the appointment had placed the diplomat in the appropriate position to benefit the nation and move the country forward.

He described Gambari as a man of impeccable character and strong will, saying that the new COS possessed the right temperament, knowledge, and experience for the job for which he had been chosen.

Sanwo-Olu, in a statement released on Wednesday, stated that the newly appointed Chief of Staff had the advantage of several years experience in the areas of international diplomacy, politics, academics, research, and management, and expressed expectation that such vast knowledge base would be brought to bear on the growth and development of the country.

He revealed that personal relations with the COS had led to his belief that Nigeria was positioned for meaningful development as a result of the recent appointment by the president.

‘‘The choice of Professor Gambari as the successor to the late Mallam Abba Kyari by President Muhammadu Buhari is commendable. Gambari is not just an academic or a diplomat, he is a fine gentleman, a decent Nigerian who epitomizes the Nigerian dream,”
‘‘I have no doubt that Professor Gambari’s appointment is a major win for the presidency and the nation as a whole, especially coming at a time when Nigeria is confronting a major challenge with global outlook.’’
Sanwo-Olu congratulated Gambari on the appointment while urging Lagosians, and Nigerians in general, to support the new Chief of Staff in the discharge of his duties.