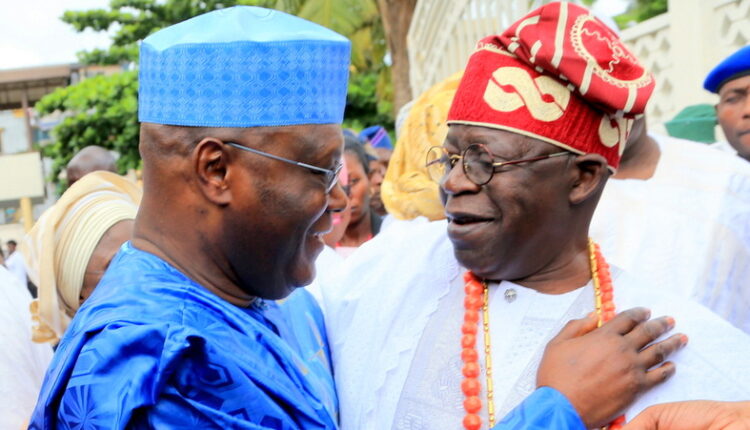 The national leader of the All Progressives Congress (APC), Bola Tinubu, has received former Vice President, Atiku Abubakar, back to Nigeria after his long absence from the country to United Arab Emirates (UAE) where he had been on holiday with his immediate family.

As gathered, the gesture was said to have been part of political calculations ahead of 2023 general elections in which the Lagos State former Governor was nursing the ambition of occupying the nation’s oval seat, succeeding his fellow party man, President Muhammadu Buhari.

Before 2019, Tinubu and Atiku had teamed up to oust former president, Goodluck Jonathan, after floating APC, a merger of over two political parties, before the former Vice president decamped to Peoples Democratic Party (PDP) following inability to secure Tinubu and other APC stalwarts support to become its flagbearer in 2019 poll.

The meeting had continued to generate reactions from Nigerians, believing that the move by both political godfathers was part of the tactics to form an alliance ahead of the 2023 polls.

Reacting to the rumour, the APC, however, set the record straight on Saturday, May 29, via its official social media handle, explaining that Tinubu met Atiku at the airport by chance and not preplanned as been peddled by many including former presidential aide, Reno Omokri.

Both statesmen arrived at the airport at about the same time and exchanged courtesies before continuing on their separate journeys. The brief ‘meeting’ was not pre-planned neither was Asiwaju Tinubu part of any entourage to welcome the former Vice President back to Nigeria.

The statement reads: “This is to inform the general public that the information contained in the above-referenced tweet is fake, erroneous, and mischievously contrived by the fake news advocate to mislead Nigerians, chase clout and gain undeserved recognition.

“It also both statesmen arrived at the airport at about the same time and exchanged courtesies before continuing on their separate journeys. According to the party, the brief ‘meeting’ was not pre-planned, adding that Asiwaju Tinubu was not part of an entourage to welcome the former vice president back to Nigeria.

“His Excellency, former Governor of Lagos state and national leader of the All Progressives Congress (APC), Asiwaju Bola Ahmed Tinubu and former vice president of Nigeria, Atiku Abubakar met last night, May 28th, 2021 at the airport by chance!”

The party also appealed to Nigerians to disregard and discountenance what it called the petty, baloney, and clout-chasing tweet manufactured by Reno Omokri.