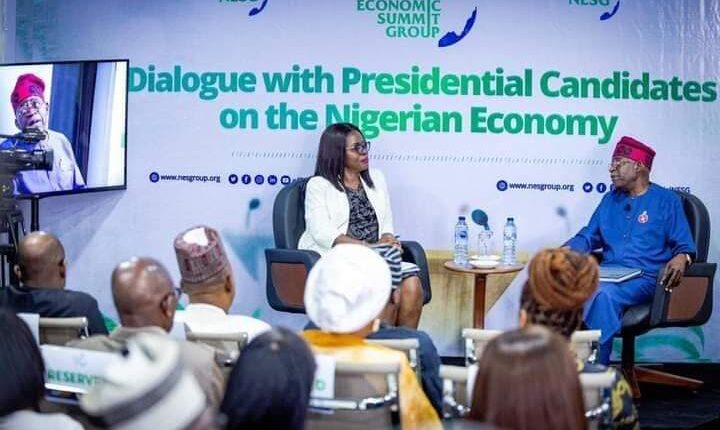 promote an increase in oil production to tap into the current high oil prices.”

Fielding questions after his presentation and responding to what he would do within his first 100 days if elected, Tinubu said he would hit the ground running by selecting a team of technocrats that will help him run the country as he did when he was governor, stating that building a good team is important.

The APC candidate was accompanied to the NESG session by Governors Atiku Bagudu (Kebbi), Nasir el-Rufai (Kaduna), Babajide Sanwo-olu (Lagos) and Dave Umahi (Ebonyi) as well as former governors Adams Oshiomhole, Kayode Fayemi (Ekiti) and Babatunde Raji Fashola who is also Minister of Works among others.

Tinubu was the first among the top candidates to appear at the presidential dialogue on the Nigerian economy put together by the NESG.

Welcoming guests to the dialogue, the Chairman of the summit group, Mr. Niyi Yusuf, said the dialogue was to give effect to a common and shared ideas on the economy between the group and critical stakeholders.

He said NESG was set up to promote and champion the reform of the Nigerian economy into an open globally competitive economy.