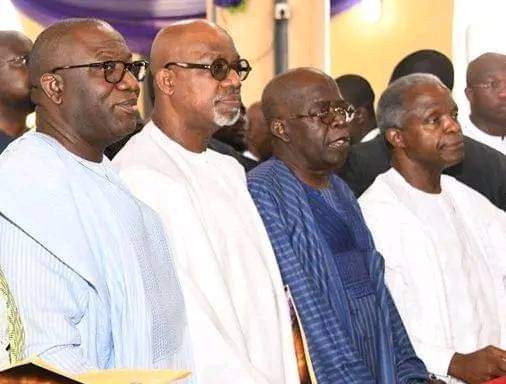 Jesus Christ remains the standard and no man can ever take that position. That is why I don’t judge people. Your sins are different from mine, yet we all commit sins.

Situation can make the holiest pastor to misbehave and can make the hardest sinner to change. God in His omnipotent can reduce a spiritually strong person to the ordinary, just to show that He is God and man is man.

And the fact that God commands us to go and dominate does not mean that Christians are called to be domineering. As Christians, we mix this up most times.

The fact that you are a pastor doesn’t mean you will be a president if you contest. And again there is a certain stage a Christian will get to in priesthood that he will not bother about elective position again.

He will see such position as carnal, yet he will ensure that his agenda as a priest gets to the top for implementation. For me, that is domination.

Pastors Adeboye, Kumuyi, Oyedepo have got to that level that they won’t seek elective office. Their priesthood commands honour from the pulpit to the podium.

And for our vice president, Pastor Yemi Osinbajo who is not a General Overseer of any church but a regional pastor in RCCG, his category of priest at the pulpit seems to be deriving pleasure from the podium too.

Osinbajo’s refusal or failure as the case may be to recognise the presidential candidate of his political party, APC, Asiwaju Bola Tinubu in his keynote address at the burial service of Mama Akeredolu is simply the function of a man’s heart.

That is how our heart is made. It speaks loud when we are angry and happy.

In the pictures taken at the church service, Tinubu was sitting beside Osinbajo, yet somebody had to remind the vice president to recognise his former boss and governor of Lagos State.

I don’t want to say that the church is mischievous with the sitting arrangement but then the idea exposes the heart of man, either we are Christ-like or ordinary churchgoers.

The pulpit expects us to have forgiven our enemies before mounting it unlike the podium, which is laced with diplomacy and protocols.

If Osinbajo was speaking from the podium yesterday, the protocols would have forced him to recognise Tinubu at least as a former governor just as he did for the former Governor of Osun State, Chief Bisi Akande and his counterpart for Cross River, Mr. Donald Duke.

But he omitted the trending name for a reason best know to him. Hope the professor is not still licking his wounds.

For me, the pulpit is more sacred than the podium as it only allows the pious, judging by the culture of the Jews and the descendants of Levi.

Even among the Levites, there are classes, one of which I think Pastor Osinbajo belongs to by his status in Christendom. He is a regional pastor of the Redeemed Christian Church of God who should know better that Tinubu needs his prayers now more than ever.

In democracy, people choose and in their contest, APC prefers Tinubu to Osinbajo. The pastor should forget the past and move. The pulpit is a holy place and should not be used to express anger.

He has not broken the protocols for not recognising Tinubu, many of his followers will say but the organisers took the professor’s attitude as an error and would not allow it go without correction. They instructed him to correct it and he did reluctantly.