Tinubu may not honour debate invitations through out campaign 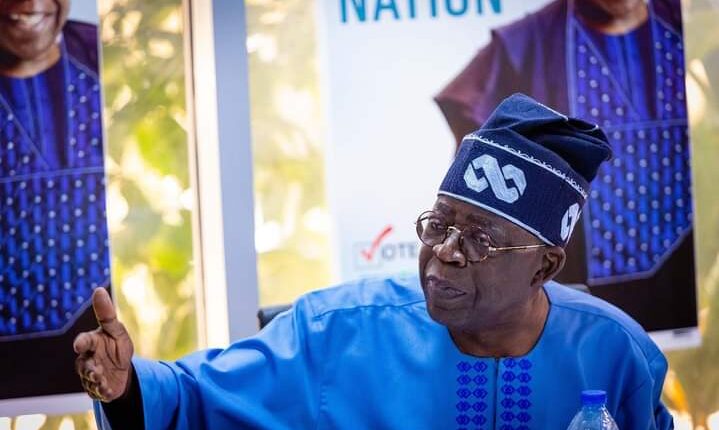 The All Progressives Congress (APC) presidential candidate, Bola Tinubu, has indicated plans not to attend any of the presidential debates organised by media firms and Non-Governmental Organisations, rather would be concentrating on having direct interactions with Nigerians through campaigns and townhall meetings across the country.

Tinubu’s decision was said to have been based on the huge number of media organisation already requesting that he attend their organised debates with other candidates and that attending one and ignoring others would indicate a sectional president and not a leader of the entire country.

As gathered, the APC candidate has concluded that rather than ire any of the media outfits due to his busy campaign schedule, considered the adoption of town hall meetings and campaign as the best option to be fair to all stakeholders.

He also considered town hall meetings and campaigns as grassroots strategies to engage and speak directly to Nigerians, who were the electorate, on the plans he and his running mate, Kasim Shettima, have for the growth and development of the country.

The Director, Public Affairs and Spokespersons, Tinubu/Shettima Presidential Campaign Council, Festus Keyamo, disclosed the plans through a statement made available to newsmen yesterday.

Keyamo, while justifying reasons Tinubu and his running mates did not attend the debate organised by one of the country’s media television stations, stressed that Tinubu or Shettima’s attendance could amount to giving some media outfits preferential treatment above others.

He noted that his busy schedule would not permit him to attend all debate requests brought before him ahead of 2023 presidential election which was why he had decided not to make selective appearances on some networks across the country.

According to the statement, “The APC Presidential Candidate in the forthcoming 2023 Presidential Election, Bola Tinubu, did not attend the Presidential Debate organised by Arise Television on Sunday,

“November 6, 2022, for the following reasons: Firstly, many radios and TV networks in Nigeria have indicated interest to host such debates and out of deference to other TV and radio stations, our candidate will not be making selective appearances in some networks, whilst ignoring others. As President of Nigeria, by the Special Grace of God, he intends to treat all persons and businesses fairly and equally.

“Secondly, the busy and hectic campaign schedules of Asiwaju Tinubu will not permit him to honour all such invitations by different radio and TV networks, hence our decision for him not to start with one TV station and later ignore others.

“Thirdly, our candidate had long before now realised the importance of speaking directly to Nigerians and shortly after unfolding his Action Plan as President embarked on Town Hall meetings beginning with his interaction with the Business Community and other stakeholders in Kano followed by the Town Hall meeting and presentation by experts last week in Lagos.

“Tomorrow, he will be interacting with Agro and Commodity Groups in Minna, Niger State. Whilst we thank Arise TV for the invitation, we want to assure Nigerians that we shall continue to hold these debate groups and Nigerians in high esteem. Nigerians will hear from our candidates loud and clear through other forums.

“Lastly, out of profound respect for Nigerians, we urge all our party structures and supporters at the grassroots to continue to organise town hall meetings to educate Nigerians on the Action Plan of our candidate as we believe a grassroots-approach to reach Nigerians will also be more profound”, he added