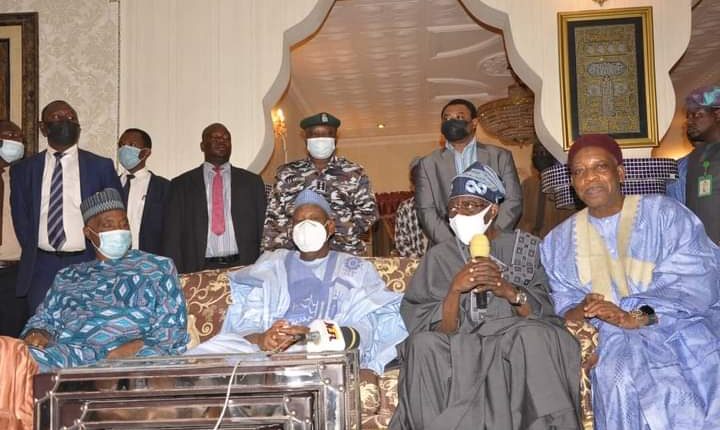 The national leader of the All Progressives Congress (APC), Bola Tinubu, and the Kano State Governor, Abdullahi Ganduje, have paid a condolence visit to the families of two former presidential candidate and aspirant that passed within a week in the state.

Tinubu, Ganduje and their associates, on Sunday, visited the home of the two deceased elder statesmen, Bashir Tofa and Ibrahim Ahmed, to condole with the families over both men’s death at the age of 74 and 83 respectively.

Tofa was the former Presidential candidate of the defunct National Republican Convention (NRC ) and a major contender for the 1993 poll, Bashir Tofa, while Ahmed was ex-Presidential aspirant under the defunct Social Democratic Party (SDP), and the President-General, Supreme Council for Sharia in Nigeria (SCSN).

Addressing families of the deceased, Tinubu described both men’s death as a rude shock to him and that the country would surely miss their contribution towards it’s developments.

The visits of the governor and the Lagos State ex-governor were confirmed by the Senior Special Assistant to Kano State governor on Social Media, Abubakar Ibrahim.

It would be recalled that while Ahmed died last December 30th, 2021, Tofa passed on barely four days after the former presidential aspirant died.

Tinubu’s visit came barely 24 hours after he led some of his associates to pay same visit to Oyo state governor, Seyi Makinde, and former governor of the state, Rashidi Ladoja, over the death of two monarchs, Olubadan of Ibadanland, Oba Soliu Adetunji, and the Soun of Ogbomoso, Oba Oyewunmi.

Tofa became famous after winning the NRC presidential ticket and was a major challenger of MKO Abiola’s in the controversial June 12, 1993, presidential election, annulled by the military government of General Ibrahim Babangida.

Tofa was the presidential candidate of the National Republican Convention (NRC) in the June 12, 1993 election considered one of Nigeria’s freest elections.

Born in Kano on June 20, 1947, Tofa had his primary education at Shahuci Junior Primary, Kano, and continued at City Senior Primary School in Kano. From 1962 to 1966, he attended Provincial College, Kano.

After completing his studies at the Provincial school, he worked for the Royal Exchange Insurance company from 1967 to 1968. From 1970 to 1973, he attended City of London College.

Tofa’s sojourn into politics started in 1976 when he was a councilor of Dawakin Tofa Local Government Council. In 1977, he was elected a member of the Constituent Assembly.

During Nigeria’s Second Republic, Tofa was at various times the secretary of the Kano branch of the then ruling party, NPN. He later became the party’s national financial secretary and was a national member of the Green Revolution National Committee.