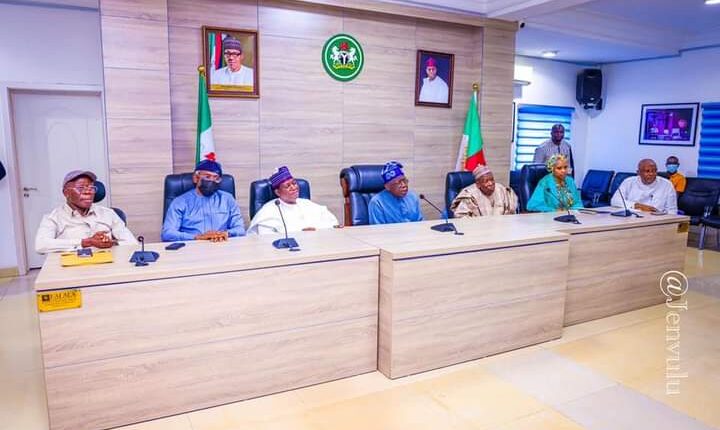 Ahead of next month’s resumption of political campaign for the 2023 election, the Presidential candidate of the All Progressives Congress (APC), Bola Tinubu, the Speaker of the House of Representatives, Femi Gbajabiamila, Plateau State Governor and Chairman of the party’s Campaign Council, Simon Lalong, and others have started meeting to strategies on messages and other logistics for the poll.

They have also met with behind closed doors with Speakers of State Houses of Assembly controlled by the ruling party, to ensure they understand ongoing plans for the poll and participate actively in the campaign with their colleagues.

The meeting was confirmed by the Director of Press and Public Affairs to the Plateau governor, Dr. Simon Macham, through a statement released and made available to newsmen on Saturday

Macham noted that before the meeting kicked off, Lalong was led to inspect the facilities at the campaign headquarters by Faleke and Bala-Usman.

According to the statement, Thereafter, he welcomed the APC Presidential Candidate Asiwaju Bola Tinubu who arrived at the office. They went into a closed meeting.

“Asiwaju Bola Tinubu and the APC Campaign DG and Speaker House of Representatives, Femi Gbajabiamila, also held another meeting with Speakers of State Houses of Assembly”.

As learnt, the Tinubu campaign office in Abuja was the same facility used by President Muhammadu Buhari for his re-election bid in 2019, and was only renovated to meet the current demands.

Revealing this development, Faleke said that the office was donated to the APC presidential candidate as his campaign headquarters while other offices will function as annexes.

Faleke added that the campaign office, located in the Central Business District of Abuja, is well equipped with Information and Communication Technology (ICT) as well as a database, call centre among others.