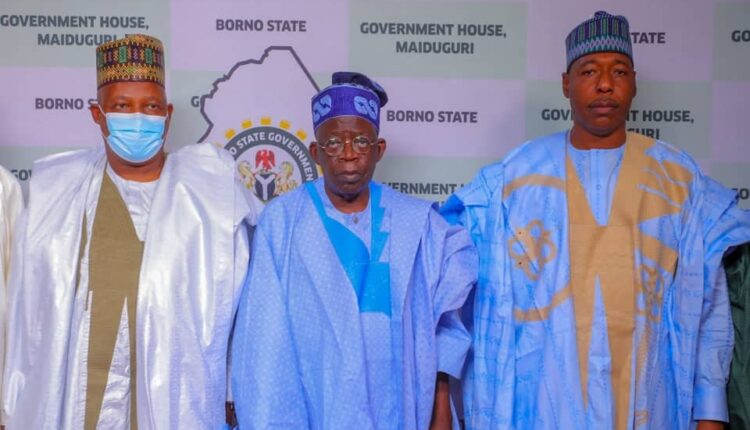 Following recent gruesome killings of 43 rice farmers in Borno State, the national leader of All Progressive Congress (APC), Bola Tinubu, has expressed worry over rising insecurities across the state and other northern states, saying the menace was disrupting peace and needed development across the region.

He lamented that the continuous issues of insecurities were affecting the region in all indices, particularly in the areas of education and infrastructural development, adding that such was impeding the competitive advantage accrued to the region.

Tinubu, who was a former governor of Lagos State, however, said that to win the war against terrorism in Nigeria, the nation’s military must adopt new strategy in their offensive against Boko Haram and other terrorist groups across the country.

He indicated that without a change of strategy, there was bound to be repeated attacks by the terrorists which may continually mar the genuine efforts being taken by the military to win the war against terrorism in the country.

Tinubu noted that it has become imperative for the military to understand that the war was no longer conventional, adding that such should spur them into adopting unconventional tactics to defeat the terrorists, whom he described as agents of doom.

Speaking yesterday when he visited the Borno State Governor, Babagana Zulum, in Maiduguri, to commiserate with him and the citizens over the recent killings of 43 rice farmers in the state, the former senator noted that the gruesome killings of such magnitude should redirect the military to replan their strategy.

He said that if nothing was done to arrest continuous killings of such magnitude, needed development would elude the state and that such would make it harder for students to return to schools and stall economic activities.

“We have been on this (Boko haram) for some time, We have seen the reaction of the federal government, we have seen the reaction of the armed forces, this is no longer conventional warfare, this is more tactical, more reason, cruder. In such a situation what we do is to replan our strategy. We have seen the Governor’s life has been attacked more than one occasion in an effort to eliminate him but Allah is mighty, he has protected and will continue to protect you” Tinubu said.

Furthermore, he noted that under insurgency governance would hardly excel and at such, all hands must be on deck to bring an end to issues of insecurities across the country.

“You can’t concentrate, become innovative, and excel if you have to make educational development in fear. We saw people who have endured so much agony, denial, brutality decided to run to their farms to develop means of livelihood not only for themselves but for all of us, in the end, they were slaughtered.

“That’s not a religion, it is not in our religion (Islam), it is not in Christianity either, it is an act of wickedness. I want His Excellency and members of the state executive to see this visit not as condolence only, not a sympathy only, but as solidarity and commitment that we must defeat all evildoers,” Tinubu also said.

The APC leader advised that to deny evildoers from recruitment of vulnerable youth, the government must come up with social protection measures that would take them off the streets.

In his response, Zulum reiterated his administration’s commitment to doing whatever it can, towards protecting the lives and property of Borno people